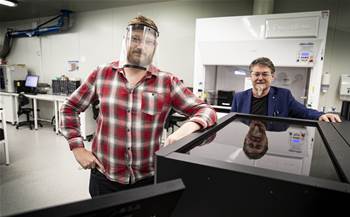 The University of Wollongong has joined a number of global organisations including Renault and Tesla pivoting their operations to 3D print medical supplies to support healthcare workers during the COVID-19 pandemic.

Researchers from the university are working with the Illawarra SHoalhaven Local Health District to determine what can be produced using local 3D printing capabilities, such as face shields or parts for ventilators.

Designs are being refined and prototypes are currently going into production for final testing at Wollongong Hospital.

Meanwhile, the team from UOW is moving towards scaling up production in collaboration with local industry to produce hundreds of face shields per week.

Manager of the UOW Makerspace - a public creative space providing ‘makers’ from the community with a space to brainstorm ideas and access tools, equipment and training - Jessica Grozdanov said the face shield initiative is supported by international open source collaboration.

“Over the past week, an open source design for a face shield that can be 3D printed has been circulated internationally,” Grozdanov said.

“We have 3D printers available at the UOW Makerspace which got us thinking whether our local hospitals could benefit from an initiative like this.

“Makerspaces and other innovative manufacturing initiatives are increasingly playing an important role in the response to crises, as we can respond quickly to a particular need and can offer innovative, local solutions in high priority scenarios.”

Separately, UOW researchers were also working on the same problem at the the ARC Centre of Excellence for Electromaterials Science (ACES), and TRICEP (the Translational Research Initiative for Cellular Engineering and Printing supported by the Australian National Fabrication Facility - ANFF).

“Our team at TRICEP, facilitated by ANFF, had been working on a 3D printed face shield design, when we were contacted by UOW Makerspace who was working on a similar concept.”

The TRICEP facility is home to a number of additive manufacturing technologies, including 3D bioprinting - a process in which biomaterials such as hydrogels or other polymers are combined with cells and growth factors, then printed to create tissue-like structures that can imitate natural tissues.

“We’re working towards a common goal and can move quickly, which is critical as face shields are in high demand, there is a great shortage of them and they are needed immediately,” Gordon said.

The team is also testing more sophisticated 3D printing designs for use in the fight against the coronavirus, including ventilator components such as vales and splitter in case a shortage arises.

Volunteers in Italy were able to successfully design and 3D print valves at a cost of US$1 per unit after the manufacturer, Intersurgical, wouldn’t release plans for the piece as they are the company’s intellectual property.

Despite widely reported rumours that Intersurgical threatened to sue over copyright infringement, The Verge reports that the company had no intention of ma