Why the US back-flipped on copyright in global treaty 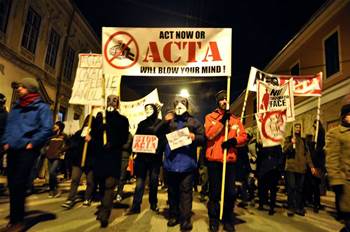 Opinion: Old arguments for ACTA and TPP no longer persuade.

The past six months has shown 2012 will be known as the year of significant changes in copyright policy and enforcement on the internet.

The "maximalist" approach often taken by copyright holders and lobbyists is not working the way it used to, as those in the negotiating seat have had to respond with a fairer, and less punitive approach to infringements.

Last week saw major defeats for anti-piracy groups in Europe and US.

The European Parliament resoundingly rejected ratification of the Anti-Counterfeiting Trade Agreement (ACTA) 478 to 39 votes, with 165 abstentions. The rejection provided a large indication that the treaty, in its current form, was no longer acceptable.

In the same week, the US contingent to Trans-Pacific Partnership (TPP) negotiations also signalled a major concession in copyright talks, by pressing for “an appropriate balance” between rights holders and their content users.

"For the first time in any US trade agreement", the US Trade Representative proclaimed, negotiators for the Government would propose new copyright provisions "consistent with the internationally-recognized '3-step test'".

The provision would "obligate Parties to seek to achieve an appropriate balance in their copyright systems" through exceptions to copyright, and limitations to application of rights for criticism, comment, news reporting, teaching, scholarship, and research.

In keeping with its covert approach, the exact wording of these provisions is yet to be unveiled. But its impact is clear.

While unexpected in the course of otherwise secret TPP negotiations, the move makes sense if the US wants to keep the agreement alive in the face of ACTA’s rejection in Europe.

The initial strategy proposed by US negotiators for the agreement was to consider watering down the contentious draft intellectual property chapter, which included new provisions for rights holders such as:

Plan B in the Dallas round was to incorporate ACTA provisions, as proposed by co-ACTA signatories Australia, NZ and Singapore.

However this provision was already shaky after signs of Europe's attitiude toward ACTA became clearer.

Australia’s position to opt for an ACTA-based TPP in the negotiations was also undermined by the Joint Select Committee on Treaties' recommendation to stall ACTA’s ratification in the last week of June.

With the current US administration set to suffer another set-back during talks, it needed a carrot to keep its IP chapter in place, if it seeks to conclude negotiations this year.

The welcome move from US negotiators also promotes a policy for more flexible copyright reforms as opposed to the maximalist agenda of the US movie and record industry.

Film and music industry bodies the MPAA and RIAA are reportedly furious with the announcement and latest draft of the TPP's intellectual property chapter. Since selected industry representatives get full access to the proposed text, it may well be that the new text contains some real policy shifts as well as a change in rhetoric, according to Public Knowledge’s Harold Feld.

In Australia, a mood to ease up on the anti-piracy rhetoric is also apparent with the recent High Court judgment on ISP liabilities, music investigation body MIPI dropping its “piracy investigations” title and, more positively, the open inquiry into copyright reform by the Australian Law Reform Commission.

The ubiquity of uses relying on the internet in many Western countries and the emergence of new business models such as Spotify, Hulu and iTunes suggests an acceptable balance of rights requires a more flexible approach than the Australian copyright regime currently allows for.

The original killer argument proposed by Australian representatives for signing and ratifying ACTA was that it would require no new laws.

The recent reversals, however, indicate that Australian business and communities were ready for new, more flexible laws that may have been otherwise encumbered by such treaties.