Why food could be the future of the internet of things 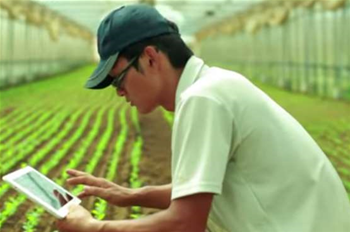 In the shadows of an imposing industrial robotics demonstration at Fujitsu's annual technology showcase in Tokyo is a small white stand with a fairly standard Japanese oven and a smartphone.

It might not look it - especially compared to neighbouring exhibits - but this otherwise unremarkable display is an early taste of a business model being developed around the internet of things (IoT).

The project translates to "capturing consumer dietary habits with connected household items" - and is essentially a way to get a free high-end oven in exchange for a bit of data on what you eat.

About 250 households have agreed to be part of a trial, a Fujitsu spokesman told iTnews.

In exchange for the oven, the consumer uses their smartphone to record what frozen ready-meals they buy and eat.

They use their phone to scan the barcode of the frozen food at the point of sale, creating a "purchase log".

Before they heat the food at home, they select the item from the "purchase log" and then place it in the oven, which communicates with the phone via NFC to create a "cook log".

Once cooking is complete, the consumer is then asked to take a photo of what they put on the table, which becomes a "meal log".

All these data logs are available to the frozen food manufacturer or food wholesaler, and can be sliced and diced using over 200 axis' - including family composition, cooking temperature and cooking time. The manufacturer or wholesaler can use the data to sell to their customers' eating habits.

The analytics tool used to process the logs was co-created by Fujitsu and its FMCG client, Ajinomoto.

That Fujitsu is now pushing IoT into the FMCG side of food production is perhaps not surprising, given the company's focus over the past year uncovering IoT applications for agriculture.

Its most high-profile agricultural project is with the sake brewer Asahi Shuzo, whose Dassai sake can be found in a number of Sydney's Japanese restaurants.

Asahi Shuzo has deployed sensor-loaded antennas into rice fields to capture the ideal conditions to grow rice used for the Dassai sake. The data will eventually form a blueprint that enables more farmers to successfully grow the rice, creating a path to increase sake production.

Though one antenna per hectare is considered by Fujitsu to be ideal, it appears the present concentration is less, mostly due to cost.

Data from the rice fields is aggregated in an agriculture-specific cloud product by Fujitsu called Akisai, a mash of Japanese characters that loosely translates to autumn colours, a reference to the season for harvest.

The Asahi Shuzo project is in its second year, but president Hiroshi Sakurai told iTnews it could be several more years before he might start to achieve his vision for increased production.

"We are still in the phase of collecting data," Sakurai said. "But the results we are yielding has been witnessed by [existing] farmers, and if more participate in growing the rice then we'll be able to gather more data."

A similar system - made up of sensors, applications and smart devices - is also being used by Aeon, a national Japanese supermarket chain, to network 15 farms it has set up to supply vegetables to retail shelves.

Aeon hopes this networking will allow all farms to take advantage of the knowledge they collectively generate.

"As a new business we faced a challenge to quickly develop farming capabilities and share expertise across all our farms," Yasuaki Fukunaga, president of Aeon's farming subsidiary, said in a case study.

"[Now] we can easily share information to optimise farm production [and] all farm workers can take advantage of collective agricultural experience and know-how."

Aeon uses the system to share information on types of fertiliser in use and whether pesticides follow industry regulations, among other data, and also transmit photographs of crops from its farms to head office.

"This is very important as we want to accurately determine yield and revenue projections for each crop on every farm," Fukunaga said.

"The ICT system provides us with precise output estimates and enhances management processes."

If the technology is proven to work in Japan, there are few reasons it can't then be applied to markets outside Japan - and Fujitsu is feeling that pressure.

"Customers are kicking us to become more international because they are developing their businesses overseas and they would like to do it with us," said Martin Schulz, a senior research fellow at Fujitsu Research Institute, the company's economic "think tank".

But speed of innovation could prove challenging for Fujitsu.

Two cases in point: the company's Openstack-based public cloud offering, K5, is not expected to be available outside Japan before April 2016, and a highly-guarded drone being developed for civil inspections, while innovative - it can roll up and down walls - is late to the game.

"I often hear that Fujitsu is so slow at [innovation]," Schulz said.

"We are usually not pressing ahead like Google, spending a few billion on a possible future technology, because we are part of the Japanese market that is ageing and moving slowly, and we are providing the customer tailor-made services to all the major groups, from Toyota to the Tokyo Stock Exchange.

"Since we are so closely integrated with our customers, we move as fast as the customers are moving. And if one of the customers does not demand something that looks much more like [what] Google [is doing] we are simply not doing it, and that is a problem."

"All the new things are happening in the consumer markets, on platforms like Google and Amazon, and they're moving fast ahead of industry," he said.

"In five years, our industrial or corporate systems will probably look like what's out there and what consumers are already using now."

Ry Crozier travelled to Fujitsu Forum 2015 in Tokyo as a guest of Fujitsu.