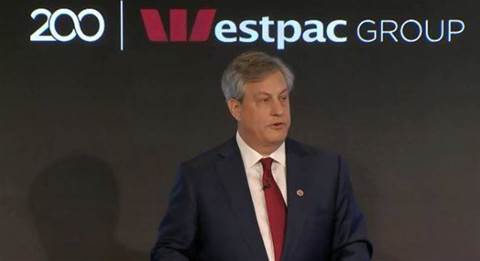 New investment in technology-related projects at Westpac has tipped the scales at a whopping $800 million for 2018 after the institution threw the kitchen sink at bringing its massive overhaul to fruition under outgoing CIO Dave Curran, with impressive results.

While the Banking Royal Commission took the gloss off a stellar performance for Westpac Banking Corporation’s technology division, the knuckle down tech push delivered savings of $304 million from a slew of tech projects.

The cost reductions – largely sheeted directly back to technology, especially automation and product consolidation made possible by a single view of customers – fast emerged as the high point in Westpac’s full year results, after cash earnings landed flat at $8.07 billion.

“Obviously we can’t get incredibly excited by a flat result,” complained Westpac chief executive Brian Hartzer, doing his best to show the humility now required after the great Hayne inquisition into bank misbehaviour.

Had the craters from customer refunds not appeared, it might have been a very different presentation, probably with the increasingly outspoken Curran in the spotlight.

The tale of the tape from the tech division is certainly substantial.

“Out of a total investment spend of $1.4 billion, we invested more than $800 million in system upgrades, digital transformation, and innovation to support our ambition to be one of the world’s great service companies,” Hartzer said.

“We have already migrated 100 applications onto our cloud infrastructure platforms which are now largely complete. Additionally, we have over 120 APIs in production and another 180 in development.”

Hartzer outlined a bunch of projects going forward, but it was the strong results of tech efforts to date, especially simplification and automation, that commanded the attention of investors.

While switching to cloud services (WBC runs a private cloud) and shifting applications there is a common metric, the real meat on the bone for Westpac’s transformation was inside its ability to shutter an impressive 35 products in combination with automating four out of six home loan products.

As margins for payments and account fees evaporate, mortgages and credit quality is where the real money is at and it shows.

Those two targets, booked under the ‘Simplify’ tranche of initiatives helped extract $180 million in savings.

Westpac’s ‘Digitise’ tranche extracted $61 million in savings from cost centres which investors like… but the community and politicians in marginal regional seats not so much.

The brutal truth of the ‘Digitise’ improvements is they helped Westpac shutter 47 branches and junk a whopping 443 automatic teller machines, even though digital transactions were up a decent, but not earth shattering, 10 percent.

Paper statements are also hanging around like a bad smell. Westpac nudged e-statements up to 48 percent, which means half of the bank’s customers just aren’t letting go of dead trees.

On the cloud front, a tranche dubbed “Modernise” and worth $63 million in savings, Curran’s well telegraphed private cloud is up and running allowing a decent cull of apps.

Westpac says it junked 69 applications and spun up 120 APIs. On the vendor management front it said there are now 180 “contract re-negotiations/reviews” under way.

If Westpac’s are increasing, so is the level of capitalised software on its books that has now risen to $2.1 billion, up from $1.9 for the previous corresponding period.

Hartzer talked up the progress, but also candidly conceded that it was better to boost prudential holdings than pull back on the pace of progress.

“These capabilities support our Customer Service Hub which is progressing to schedule. While delivering these major projects, we have also significantly improved system reliability and response times, helping our people to provide better service to customers,” Hartzer said.

“We have introduced a number of new digital initiatives including Siri for Westpac, mobile cheque deposits, new online home loan applications, and E-Sign which allows a customer to complete a mortgage application online or via their mobile,” Hartzer continued.

“Consumer payment innovations include partnerships with Google Pay, Garmin, Fit Bit, and Beem It—a mobile payment app which enables free and instant payments for anyone in Australia with a debit card, regardless of whom they bank with.”

Hartzer also talked up Westpac’s upping of its fintech ventures investment find “Reinventure” which it’s now boosted to $150 million. The theory is it’s better to have a stake in those trying to eat your lunch than to just let them eat for free.

“Strategic investments in companies including Assembly Payments, Zip, Uno, and Open Agent, as well as Reinventure’s growing portfolio of Fintech startups, position Westpac to harness the benefits of data and rapid technological change while bringing new value-added services to our customers,” Hartzer said.

The main attraction in terms of where Westpac will continue to drive savings and tech driven performance over its peers remains its new customer service hub that is now being piloted on mortgages and will go live in early 2019.

Having been estimated to have cost around $500 million, the platform will finally fuse together a single view of both Westpac and St George customers, which remains core to Westpac's professed multi-brand strategy.

"As we collapse the old St George systems and the Westpac systems into one, which will happen progressively over the next few years, that’s going to lower the cost of running," Hartzer said.

"The big cost story for Westpac over the next little while is the modernisation, simplification and automation of our underlying platforms and technology in particular."

Hartzer stressed it wasn't just about sweating what the bank has now, but whaty it will do in the future.

"Very importantly...it’s going to lower the cost to make changes. Given that we are already quite efficient, the benefit of getting those systems modernised is going to give us a huge advantage on cost over the medium term," Hartzer said.