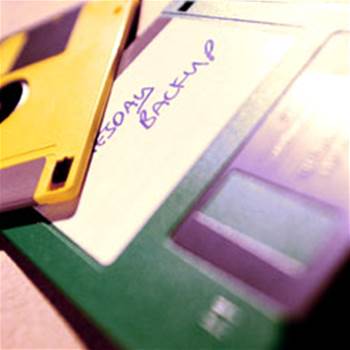 The service allows small business customers to download a client which manages regular, scheduled backups of a PC to WebCentral's data centre.

Telstra built its online backup service based on the resale of software by US vendor Iron Mountain, which launched an Australian office in February. But Melbourne IT refused to divulge which systems vendor it has white-labelled the WebCentral service from.

"Using a service hosted overseas has a detrimental impact on transfer speeds," he said.

When backing up several gigabytes of data, Gore expected the different to be "less than an hour" to backup locally versus "never really completing it" for a service offered from overseas.

He also listed several reasons why a customer would choose WebCentral's service over the Telstra T-Suite online backup service launched earlier this month.

While it is rented via a monthly rental charge, customers must sign 12-month minimum contracts and are charged 35 per cent of the remaining value of the contract should they choose to switch providers.

The WebCentral service, by contrast, is not limited by device and offers unlimited copies of a customer's back-up. The user can back up as many versions of data sets as they wish - the more data they backup, the more they pay.

Melbourne IT users pay only according to the volume of data backed up on a month by month basis as opposed to being locked into 12 month contracts.

Both services offer incremental backups - smarts usually reserved for enterprise users. The software can detect what files on a given volume have changed since the last back-up and only sends the changed files over the network.

The cheapest backup plan on T-Suite is $14 per user per month for two gigabytes of data. WebCentral offers 2 GB for $14.95 per month.

These services are being charged at far lower prices in the more mature U.S. market.  The EMC-owned Mozy online backup service, for example, offers a 2GB backup service for around US$4.95 per month and boasts close to a million customers and 20,000 small businesses as customers.

Larger data users will also find the costs prohibitive. Telstra's 10GB service is $30.00 per user per month, WebCentral's service is twice the price at $59.95.

The WebCentral service, like Telstra's T-Suite, uses file compression to minimise the amount of data traversing the network during a back-up.

Gore said that the transfer of typical office files (such as word documents or spreadsheets) can be compressed to "orders of magnitude", but compressed images such as JPG files cannot be optimised much further.

Most small businesses in Australia connect to the Internet via ADSL (Asynchronous DSL), which has high download speeds and far lower upload speeds. But Gore said this reality will not have an adverse impact on the backup service.

"You aren't really interacting with the destination when you are backing up, it is just a trickling of data in the background. When you need to restore, you do want to interact, so the asymmetric nature of those services work in your favour."

That said, he agreed that users with large data sets would be better off with a symmetric connection to take full advantage of the backup service.