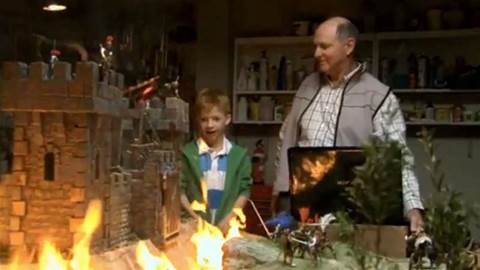 Australia's competition watchdog (ACCC) has issued a warning to Microsoft Australia, stating that the software vendor should be more careful when advertising the security capabilities of its latest operating system, Windows 7.

During the Windows 7 launch event in Sydney in October (see photo gallery top right), journalists were shown a number of advertisements that would feature in a television campaign - including one touting the operating system's security capabilities.

The advertisement in question featured an elderly gentlemen with what looked to be his grandson. They were playing with a very grand toy castle and talking about IT security.

"A while back something just popped into my head: 'My PC should have more security'," said the grandfather. "Like 50-foot castle wall-type security. Next thing I know, whammo! There's Windows 7. Now it keeps all my personal info safer and I don't have to worry about bad stuff getting through. Victory is mine. How's that for secure?"

At this point a wall of flames surrounded the castle.

During the ensuing Q&A session, journalist Nick Ross asked Jeff Putt, who heads up the Windows consumer team, if he thought the advert was misleading.

"Don't you worry that [the advert] might just be misleading a few people into not buying antivirus software?" Ross asked. "Because you're still going to have to, aren't you?"

Putt responded by saying consumers should get "more sincere guidance" from a third party.

The advertisement - and others - have since been aired in New South Wales, Victoria, Queensland, South Australia and Western Australia. They also ran in Canberra for a short period of time.

"They are running across all three [major] channels,"  a Microsoft spokesman said. "Channel ten, channel seven and channel nine".

A spokesman from the ACCC told iTnews on Thursday that its staff investigated the advertising campaign touting Windows 7's security.

The ACCC agreed that the advert could be detrimental, but said its likely impact "would be small".

"Some people might have read it as an absolute claim," the spokesman said.

The competition watchdog conceded that there were "always shades of grey" when it came to advertising - and because of this, "the ACCC have written to Microsoft and let them know".

The spokesman said the claim made by Microsoft should have been "comparative" if it was going to tout the security of its operating system.

Microsoft Australia said it was "not in a position" to comment at the time of publication.