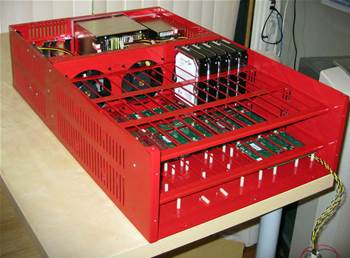 A blog with detailed instructions on building a custom storage pod for a data centre has generated enormous interest online since it was posted on September 1.

The article, by Tim Nufire at online backup service Backblaze, contained exploded diagrams and wiring schematics that the company used to build a rack-mounted unit containing 67 terabytes for just US$7867.

Backblaze CEO Gleb Budman said the response to the article in the past 36 hours had been "a little crazy".

"We literally had no idea what to expect. We went down this path because we needed cheap reliable storage, and we never intended to build our own storage - that's not our core business. And then we thought maybe we should share it with others."

Budman did a Google search on the pod and found that in just a day and a half it had generated 30,000 hits.

Backblaze spends "hundreds of thousands of dollars" on storage to support its online backup business, which targets individuals and small business.

Budman said the company had decided to build its own storage units because the cost of assembly was up to eight times lower than the cheapest product sold by IT vendors.

"When we looked at [expanding storage] for ourselves, I could go the open market and buy a 1.5TB drive for $150. Storage vendors would charge $1000 for a 1.5TB drive to put in a storage system," said Budman. "A lot of it is just pure mark-up."

In his blog post, Nufire compares the cost of assembling a petabyte of storage using Backblaze's storage pods to the retail prices charged by vendors for the equivalent amount of storage.

Budman added that this was not a direct comparison, as the figure for the Backblaze storage pod was only the cost of building the box.

"Obviously there's no tax, there's no shipping, there's no mark-up for any sales team or marketing team, or the support infrastructure or warranties. We have just published the cost to build it," said Budman.

Budman also pointed out that the Backblaze pods were designed for storage only and not for high-performance transactions. "We don't run databases on them," he said.

The storage pods had a throughput of an "easily sustainable" 200Mbps. "They could burst higher than that. But we don't need any one of these boxes to accept crazy amounts of data at any one time," said Budman.

Budman said that the higher prices charged by IT vendors were "a combination of value and mark-up".

"But for a lot of companies out there that just want to store a lot of data I think there's a lot more mark-up than value," said Budman.

Budman said that a company could probably cover the cost of support and marketing by doubling or tripling the cost of assembly. Even tripling the build price to US$351,000 would still make the pod less than half the price of the next cheapest solution.

Read on to the next page to find out why the company replaces one drive per week.