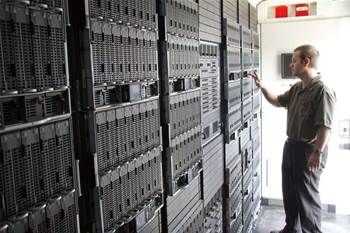 Murdoch University POD only stage one in $80m cluster plan.

Academic supercomputing group iVEC has revealed plans to expand its Pawsey Centre supercomputer cluster into petascale territory after winning a place in the Top500 supercomputer list with only Stage One of the cluster built.

Stage One, a HP POD deployment at Murdoch University, was ranked #87 on the world supercomputer list this month.

The server cluster is connected to 500 terabytes of HP storage and 4x infiniband connections, and connects to other research facilities and the outside world via a 10GB Ethernet connection supplied by Amcom and Uecomm.

But the HP POD represents only one fifteenth of the computing power iVEC expects to create with its $80 million Pawsey Centre supercomputer, funded by the Federal Government.

The POD format - usually chosen for reasons of speed of deployment - will be abandoned as the Pawsey Centre facility is built out.

"The POD is stage 1A of the Pawsey Centre," said iVEC spokesman David Satterthwaite. "Other Pawsey supercomputers will not use that format."

Satterthwaite revealed that Stage 1B of the Pawsey supercomputer will be housed in an existing University building and the final stage will be the purpose-built Pawsey Centre building located adjacent to CSIRO's ARRC (Australian Resources Research Centre) facilities in Kensington.

"The facility represents a major advancement in computational research in Australia where scientific discovery is largely dependent on the ability to process masses of information as quickly as possible."

The supercomputer is "widely available" to local and international researchers, he said, but iVEC is cautious about opening up its excess supercomputing capacity to private industry.

"While we currently engage in limited projects with industry due to competitive concerns, opening this massive compute up to industry in the future is a likely option," he said.