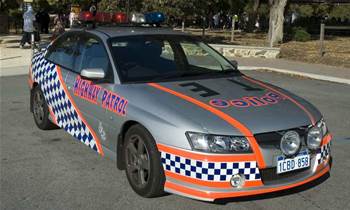 Strikes a deal with Motorola and Telstra.

The West Australian Police is planning an overhaul of its mobile connectivity, extending its existing secure private radio network and rolling out 200 ruggedised PDA's intended for field officers to use via a public 3G network.

Since 2006, close to 400 police vehicles in Western Australia have been fitted with in-car terminals connected to a 45.2 kbps private digital communications network developed with the WA Police by Ansaldo.

The in-car computers are made up of a CPU and modem stored in the boot of vehicles, with keyboards and screens mounted on the dashboard.

Superintendent Lance Martin, program manager for a new project called PETI at the WA Police, said the PMRN project has been such a success that the law enforcement agency is set to "double the size of the data network with which police officers can access."

By December 2010, WA Police will be able to access a network that covers 20,000 square kilometres. The private network will stretch as far north as Lancelin, east as Mortham and south as Dunsborough.

"It has essentially gone from a Perth-centric solution to a State-wide implementation," Martin said.

Beyond these areas, WA Police has also signed an agreement for the in-car devices and a fleet of new handheld PDAs to roam onto Telstra's Next G network.

An additional 350 vehicles will be fitted with in-car units that can roam between the private and public networks - and further, the WA Police is rolling out 200 ruggedised Motorola MC75 PDA's, which will connect exclusively to Telstra's Next G mobile broadband network.

The ruggedised devices will be used to access such data as criminal history records, mugshots, police vehicle locations, vehicle registration details and other information vital to field officers, Martin said.

Martin said he had no concerns about WA Police accessing such data via a public telco provider.

"The only thing that made it possible was a higher level of security put on the device," he said. "As you can imagine, there are multiple levels of security involved. There are screen locks onto the device, access to data is only available via an authentication gateway, all data transmitted is encrypted, and we can either track or disable any device that is lost or stolen. Also, once the device is turned off or not used for a period of time, all data local on the device is triple-wiped.

"We have people whose job it is to assess these types of risks - they have gone over it with a fine tooth comb and it has been endorsed," he said.

Martin said the success of the WA Police's mobile data project has been staggering - and can be the difference between life and death for many officers.

"We were originally recording 800 enquiries per day, from officers seeking car registration, checking address and other factors concerning criminal history," he said. "More recently we recorded 360 devices logging in on a single day, making 26,200 enquires."

Martin, a trained police officer as well as an IT project manager, said he had "the best job in the WA Police."

"Being an operational office and seeing what needs to be done, and then being given the job to implement a system that provides such benefit to police officers, its just fantastic."