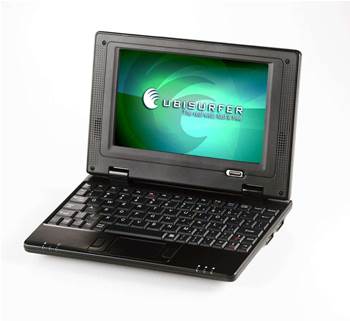 Mobile network operator Vodafone has dipped its toes into the whitebox computer market, partnering with IT distributor Impact Systems to offer a low cost netbook that sells with 12 months' free access to Vodafone's GSM network.

The UB Surfer, a Linux-based device with a seven-inch screen, built-in SIM card and a 1GB flash drive, retails for $299.

Peter Agamalis, senior channel manager of Impact Solutions, called it "the only real netbook in the world" because it is designed to be permanently connected to the internet.

"It's always been a dream of mine to supply to consumers a PC that you can purchase and out of the box, have the internet experience immediately," said Agamalis.

By comparison some netbooks required a USB dongle, purchased separately, to connect to the internet. "It is the only real device that is designed and built for internet surfing," said Agamalis.

He claimed the UB Surfer had already sold over one million units worldwide.

"There's nothing like it in the world, in fact. No one can reach or match this price. That's why the take-up on this product is so aggressive, they just can't make enough," said Agamalis.

Other vendors and telcos have released subsidised netbooks bundled with 3G internet contracts which locked in users for two years.

Agamalis estimated the average cost of a 3G contract is $20 a month, which added $240 over two years to the price of a netbook sold through telcos like Optus or Telstra.

The internet connection sold with the UB Surfer was included as part of the retail price and its supplier, Vodafone, is essentially treated as an OEM.

The UbiSurfer also has roaming rates of five pence (8.75 cents) a minute in Europe, the USA and other countries listed on its website.

The UB Surfer has some restrictions compared to other netbooks. The UB Surfer connects to the GPRS network rather than the faster 3G, and it can only connect to 802.11g wireless networks and not the latest 802.11n.

However, the UB Surfer's Canadian manufacturer, Datawind, said the device used proprietary compression technology to lift download and upload speeds beyond those of other netbooks.

Access to the internet is also limited to 30 hours a month. Users can pay an additional $9.95 a month for unlimited access.

After the first year of purchase, users can pay another $49.99 for another year's worth of internet access.

The battery life was three hours; no camera or microphone were included on the UB Surfer, however they will be included in the next version for the use of videoconferencing, said Agamalis.

The device included a copy of the Open Office productivity software and is bundled with 50GB online storage. The screen bezel is encased in a "rubbery type material", according to Agamalis, who said, "It's designed to cop a few knocks and bumps. They say it's relatively shockproof."

Impact Systems was looking to import another Datawind product, the smaller Pocket Surfer 3. The Pocket Surfer will be sold with an "immortality plan" that gives buyers unlimited internet access for the life of the device for $180.

"If [the netbook] lasts for 10 years, so does the contract," said Agamalis.

Impact Systems imported 5,000 units a month ago and is "having trouble" meeting Christmas demand, said Agamalis. He predicted the distributor would sell another 10-15,000 over Christmas.

He said he was about to sign a distribution deal for 3,000 UB Surfers with a "major retailer" which had never sold IT products other than LCD TVs.

Agamalis said the price of the product was structured so that "there's no money in it for big vendors" thinking of competing.