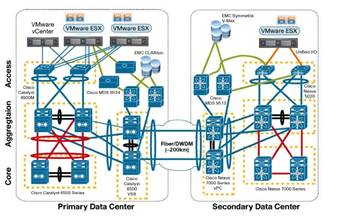 VMware and Cisco have announced support for a solution that allows for virtualised applications to be shared over a network up to 200 kilometres apart.

Described as 'Long Distance VMotion', the support builds on proof of concept trials the two companies have been working on since discussing the plausibility of the solution at the Cisco Live! event in July.

VMotion is a VMware technology which, in its usual application, allows for virtual machines to be dynamically shifted between devices within a data centre.

The prospect of shifting applications between data centres over long distances has significant implications for disaster recovery and maintenance, said Walt Blomquist, vice president of marketing for data centre switching and services at Cisco.

"There has been a lot of discussion about long distance VMotion this week, as it essentially allows customers to realise the benefits of utility based computing," he told journalists at VMWorld 2009.

Two weeks ago, the two companies validated a live scenario in which they ran both Microsoft Exchange with 12,000 users and an e-commerce site with 16,000 transactions per minute between data centres some 200kms apart.

The trial used a Cisco Catalyst 6500 switch at one end, a Nexus 7000 switch at the other, plus VMware VMotion software, Cisco Data Centre Interconnect technologies and Cisco SAN extension I/O acceleration, Blomquist said.

Shekar Ayyar, vice president of infrastructure alliances, VMware said that while the proof of concept was based on existing products - it was the "first time VMware has a supported configuration for long distance VMotion."

"By that I mean that tech support will help you troubleshoot," he said.

The end game, Ayyar said, was to allow for the seamless migrations of applications between data centres and the import and export of clouds between one data centre and another.

Blomquist said there were many factors organisations should consider before attempting the same feat - particularly around security policies and storage.

"This is a beginning - a tip of the iceberg - but an important and significant beginning," he said.

A white paper on long distance VMotion is available here.