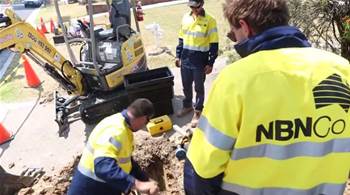 Communications Minister Malcolm Turnbull has gone on the offensive to address mounting concerns of a Coalition-led slowdown of the national broadband network project.

The new Minister toured a fibre-to-the-premises deployment being undertaken in the Western Sydney suburb of Blacktown, which he said was proof the NBN Co was proceeding with work despite the change in government.

"We have issued design instructions for more premises - twice as many premises to be passed by June 30 next year as the NBN has passed to date, so the proposition that the rollout is being stopped or slowed is simply not correct," Turnbull said.

He also took aim at Blacktown being prioritised for fibre in the first place.

"[The] site we visited today v[ery] interesting not least because already Telstra and Optus HFC available there - yet prioritised for FTTP by Labor," Turnbull said via Twitter.

The Coalition's NBN strategy will target under-served areas before those it deems to already have fast broadband connections available.

Turnbull is facing a growing backlash on the NBN as works slowly begin to pick up pace following the restart of pit remediation, the impact of the federal election and announcement of a 60-day review of the project, which is ongoing.

The Coalition's quiet removal of 506,850 premises which had been slated to receive FTTP is also a bone of contention, although Turnbull has defended the move, saying construction had never commenced to any of the premises, despite appearances to the contrary on NBN maps.

"What we wanted to do, and what we will do with the NBN is tell people the truth," Turnbull told Meet the Press last Sunday.

"If I said to you, "I've started constructing my house," you'd think there were actually builders on the site. This [506,850 premises] is the equivalent of saying you had started construction on a new house, from the moment you called your architect and asked her to do a sketch plan.

"I don't want to have premises and areas on a map being promised a service ... when we simply don't know when it can be delivered."

The number is increasing, with the latest update showing 7926 brownfields premises passed in the week to November 3.

Turnbull has also issued build instructions that will see 150,000 more premises passed with fibre, bringing the Coalitions FTTP guarantee in brownfields areas to a total of 450,000 premises.