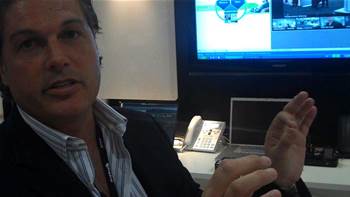 Works with telcos to offer telepresence as a service.

Networking giant Cisco Systems has created a program for telcos and systems integration partners to pursue interoperability between Cisco's telepresence systems and the video conferencing tools of competing vendors.

Cisco set up a stand at this week's Networkers conference to prove to customers that its pricey telepresence units could interoperate with competing solutions.

Curiously, Cisco announced it would acquire one of its largest video conferencing rivals Tandberg earlier today.

"We're demolishing some of the myths in the industry that we can't talk to Polycom Systems or Tandberg Systems or we can't interoperate with recording or desktop systems," said Peter Hughes, manager of communications and collaboration at Cisco Systems.

"We think it's absolutely important for customers that have investments in other technology that they can plug into [Cisco's telepresence]."

The vendor showed how it could integrate a telepresence unit with a desktop webcam, a Lifesize system and a Tandberg system at the event.

Hughes said traditional systems integration partners such as Telstra, Alphawest, Dimension Data, BT and IBM, as well as specialist video integrators like Broadreach and Integrated Vision, are being trained to provide integration services.

"We see partnerships between telcos and our systems integration partners to provide this [integration] capability for our customers," Hughes said.

Telcos get their skin in the game

A few stands away at Networkers, Telstra was meanwhile demonstrating its participation in a global telepresence interconnect exchange between the world's major telcos.

Cisco is relying on such telco partners to provide customers interconnect services, such that their telepresence units can communicate with partners and customers using similar systems overseas.

Hughes said telcos are moving towards a model of offering telepresence as a "pay as you go" utility service.

"When you start talking about high definition and higher bandwidth, the telcos are in a very good position to tariff that appropriately. What we are starting to see is innovative pricing in the market. Instead of having a very high entry to market, we're seeing things costed as 'pay as you go'.  When you send an SMS from Sydney to Melbourne, you pay for the SMS, not for your use of the network or the link. We're starting to see these sorts of consumption models."