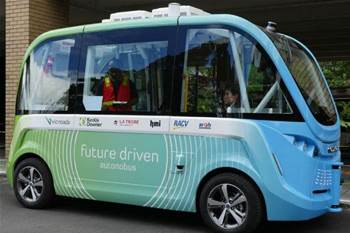 Human operator on board for safety.

La Trobe University students and visitors will be able to travel around campus on a driverless shuttle bus as part of an autonomous vehicle trial running until July next year.

The state government has sunk $375,000 into the Autonobus project, which is run by Keolis Downer, HMI Technologies, the Australian Road Research Bureau and the Royal Automobile Club of Victoria.

Operating at the university's Bundoora campus, the Navya Autonobus will run along Science Drive during the trial, transporting people to and from tram and bus interchanges.

Although the bus is nominally self-driving - using 360-degree vision cameras and sensors for guidance on the road - during the trial an operator will be on board and ready to take control in case of any incidents.

Sydney followed suit in August this year, with a two-year trial of a driverless bus in the Olympic Park area. Navya is supplying the 15-passenger bus for the Sydney trial as well.

South Australia was the first Australian jurisdiction to pass laws that enabled testing of driverless vehicles, and later performed the first fully autonomous driving trial in the southern hemisphere.

Earlier this year the National Transport Commission and AustRoads published guidelines on how autonomous vehicles can be tested on public roads.