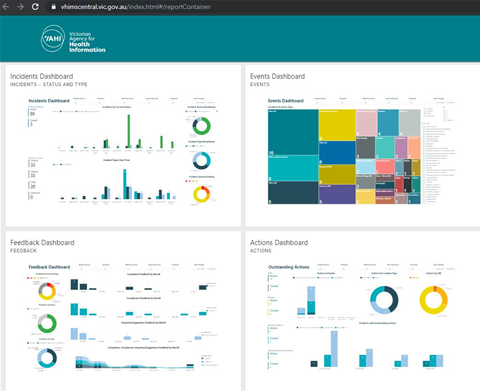 Victoria’s Department of Health and Human Services has developed a new incident and feedback reporting system to improve patient and client safety across the state’s hospitals and health services.

The Victorian health incident management system (VHIMS) central solution streamlines the collection, analysis and reporting of clinical and occupational health and safety incidents, as well as other hazards and consumer feedback.

It replaces a decade-old incident and feedback reporting system, which the department says has stymied accurate state-wide reporting for the better part of a decade” and frustrated healthcare professionals.

Senior stakeholders first urged that a new system be developed following a series of unfavourable audits in 2013 and 2015, and the government’s ‘Targeting Zero’ review of hospital safety and quality assurance in Victoria.

But it was not until the creation of the Victorian Agency for Health Information (VAHI) in 2016 to improve safety of patients and staff across public hospitals and health services that a catalyst – and funding – for the new system was formed.

Chief information officer Steve Hodgkinson proposed using the Platform+Agile delivery approach, which the department has previously used for a number of other projects, to overcome problems associated with the build.

“The devolved nature of the Victorian health sector, however, created many implementation challenges for the department,” DHHS said.

“Several attempts to replace the existing system had failed. Fresh thinking and an innovative approach were required.”

The department worked with a “group of over [a] hundred user champions”, as well as an organisation psychologist and number of other stakeholders, to iteratively design the system and ensure that it is user-centred.

“The use of Microsoft Azure, the .NET framework and APIs allowed the team to deliver new releases to a fast cadence and satisfy stringent privacy, data security and integration obligations within a high profile and tightly regulated environment,” the department said.

“This approach ensured a smooth implementation and high degree of ‘buy in’ to the new system – with positive user feedback.”

The department also partnered with Microsoft engineers, as well as other personnel sourced from the department’s solution delivery panel, to source additional capabilities and resolve solution design challenges as required.

Since the system went live, the department has already recorded 75 percent reduction in the average time taken for nurses to enter an incident report.

The previous system relied on a cumbersome incident data entry process that took 40 minutes for healthcare workers to complete.

Incident report has also improved, particularly at some smaller community health services and bush nursing services which has reported a 300 percent increase.

It will shortly approach to market for industry partners to either implement the central solution or deploy a modified local instance of the solution as a configurable API-enabled cloud service.

“This system will be the first major in-house developed cloud services application to be widely deployed across the Victorian health sector. It is a game changer,” the department said.

This project is a finalist in the State Government category of the iTnews Benchmark Awards 2020.