US retail websites go down under Cyber Monday traffic 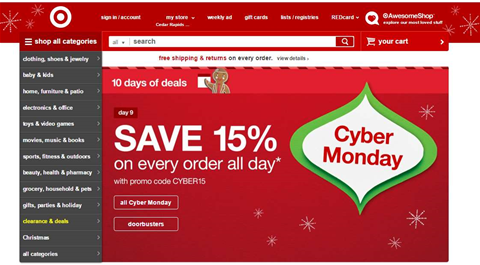 Shoppers after bargains cause strain.

Target US was one of a handful of US retailers to today struggle to keep its website alive under heavy traffic on Cyber Monday.

Shoppers looking for bargains on www.target.com were greeted with an error message early in the morning: "So sorry, but high traffic's causing delays. If you wouldn't mind holding, we'll refresh automatically & get things going ASAP."

"Both traffic and order volumes are exceeding Target's Thursday Black Friday event ... To help manage the volume, we have been metering traffic to the site," Target spokeswoman Jamie Bastian said.

The company, the fourth largest US retailer, said it was working to restore its site to full functionality.

While the site was intermittently accessible for some users, items could not be added to the shopping cart. An error message read "There's a line for this item. So sorry for the delay."

In what Target has called its "biggest, boldest plans" for Cyber Monday, the retailer is offering 15 percent discounts on almost all items on target.com.

Target said on Friday it had "unprecedented results on target.com" on Thanksgiving Day, and the company planned to offer free shipping on target.com through Dec. 25.

Deals include 50 percent off on licensed kids' cameras and select Sennheiser in-ear headphones.

Other websites that have faced outages since early Thursday include Victoria's Secret and Foot Locker, according to website performance monitor Catchpoint Systems.

About 121 million shoppers planned to shop online on Cyber Monday, down slightly from the 126.9 million who planned to participate last year, according to the National Retail Federation.

Target's shares were down 1.1 percent at US$72.59 in late morning trading.