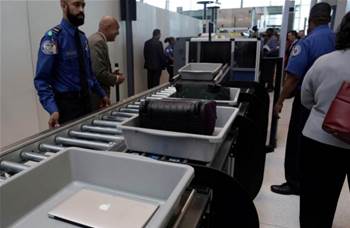 The US Transportation Security Administration is lifting a ban on passengers on Saudi Arabian Airlines carrying large electronics like laptops onboard US-bound flights, the last carrier under the restrictions.

In March, US officials imposed restrictions on passengers carrying laptops and other large electronic gear in cabins on nine airlines, most of which were Middle Eastern carriers, to address the potential threat of hidden explosives.

Last month, US officials announced new security requirements for all airlines rather than an expansion of the laptop ban and have been dropping the restrictions from airlines as they boosted security.

A TSA spokesman said the US government had lifted the restrictions at Saudi Arabian Airlines' main hub in Jeddah at King Abdulaziz International Airport on Monday.

Last week the US Department of Homeland Security (DHS) issued a revised directive to airlines around the world in response to requests that it clarify aviation security measures scheduled to begin taking effect later this week.

An airline official briefed on the matter said the directive gave airlines more flexibility and additional time to obtain explosive trace detection equipment. The official was not authorised to discuss sensitive security issues with the media and requested anonymity.

The directive includes technical adjustments, agency officials said, declining to release the text. European airlines have been pushing for changes to meet the new requirements.

DHS has said that it could impose new restrictions on laptops if airlines do not make security upgrades.

European and US officials told said airlines have until July 19 to put in place increased explosive trace detection screening and other measures, and 120 days to comply with other security measures, including enhanced screening of airline passengers.

The new requirements include enhanced passenger screening at foreign airports, increased security protocols around aircraft and in passenger areas and expanded canine screening. They affect 325,000 airline passengers on about 2000 commercial flights arriving daily in the United States, on 180 airlines from 280 airports in 105 countries.

A group of airline groups, including the International Air Transport Association, criticised the new requirements in a July 14 letter to US officials, saying it is a "fundamental shift away from the risk-based approach" and it would be "extremely difficult" to "meet the deadlines because of the lack of availability of screening equipment technology and resources."

TSA spokeswoman Lisa Farbstein defended the new security requirements, which are aimed at avoiding expansion of the laptop ban. She said the agency has been working with airlines for months to keep them informed on security issues.

"As we look to stay ahead of the evolving threats, we’ll be working with global aviation stakeholders to expand security measures even further," she said, adding the government has "seen a web of threats to commercial aviation."