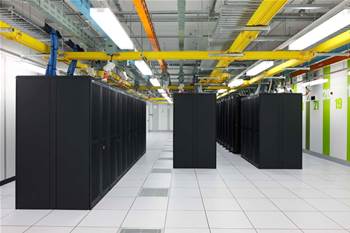 The NeCTAR project at the University of Melbourne.

The project had $50 million in Federal funding and initially aimed to establish a distributed storage network of up to 70 petabytes of data to facilitate sharing and re-use of research data.

UQ project director Dr Nick Tate told iTnews this week that project coordinators now hoped to draw together some 100 petabytes of disk and tape storage for the RDSI by 2014.

RDSI will comprise eight distributed nodes -- most likely to be data centres within universities across Australia -- that would be connected by a dedicated high-speed data network.

“We should get 100 petabytes of storage across the country,” he said.

“Our intention is to have six large nodes and up to four secondary nodes ... We’re starting to contract these nodes or data centres and we’ll be able to announce them fairly shortly.”

RDSI will rely on the Australian university federated identity system provided by the Australian Access Federation to control access to its nodes and extend access to public cloud infrastructure.

“Individual university identities can be used across the shared resources,” explained Tate.

“We’re looking to extend access to data based on that federation and we’re talking to public cloud vendors about storage.

"The idea is to set up a gateway which enables fast connections into them and also be able to propagate that federated identity to make it available for universities to use public cloud in addition to the storage that we’re putting in.”

Tate declined to say which cloud providers RDSI was in discussions with, but said it was “speaking with a range of overseas and Australian cloud providers.”

He agreed there was a shortage of local cloud data centres, but said the bigger problem was whether those providers had a local network point of presence (PoP).

“There’s a difference between having a local data centre and having the ability to peer your local networks in Australia,” Tate explained.

“We’re putting in a high speed network which enables universities not only to talk to the data stores we’re putting place but allowing them to make quick connections into some of these cloud services.

“The question really is do they have network point of presence one can connect to in Australia or does it have to go and connect overseas. That’s probably the biggest issue rather than where the data is held.”

Disk and tape for long-term storage

Last week, RDSI and CAUDIT -- an Australia and New Zealand council of university CIOs -- announced an initial panel of 12 vendors that were approved to supply hardware for the project.

RDSI has set aside $28 million for storage equipment.

Despite the falling cost of solid state storage, Tate said RDSI’s nodes would rely largely on disk-base storage and tape backup, thought to be more cost-effective for long-term data storage.

He explained that RDSI’s “sister” project, the $47 million, Federally funded 'NeCTAR' project, would likely be looking at high-speed storage solutions, while RDSI’s goal was to support long-term storage.

RDSI will also utilise AARNet’s research network carrier which will connect each node.

“We’re expecting to get to 100 Gigabits between the primary nodes by the end of the project,” said Tate.