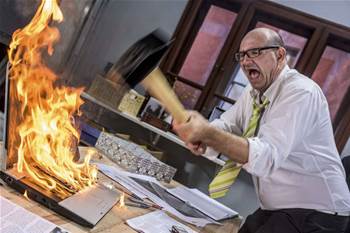 A test message sent out to all staff at Britain's National Health Service has resulted in degraded email delivery as users pressed "reply to all", inundating inboxes throughout the organisation.

NHS users took to Twitter to complain about an IT contractor at NHS Croydon sending a test message to the entire health provider's user base, creating an avalanche of replies.

One NHS IT worker estimated that the message, which went out to 1.2 million users, had created almost 300 million unwanted messages for staffers.

Another NHS staffer told iTnews the test email was blank.

The bungle amounted to a self-inflicted denial of service attack.

NHS Digital, the health provider's IT services arm, confirmed the email mistake. The mass email send-out was blamed on an unspecified bug in the contractor's system.

"A number of email accounts have been operating slowly. This was due to an NHS Mail user setting up an email distribution list, which inadvertently included everyone on the NHS Mail system," the agency said.

"This was not the fault of the user and was due to a bug in the supplier's system."

The NHS contractor has disabled the email distribution list to prevent further replies.