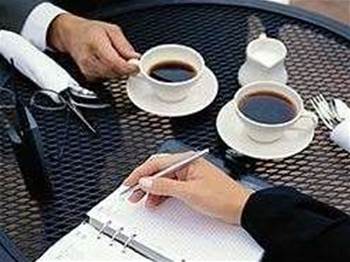 The proposal was signed off by the national security committee - which is made up of senior cabinet members including Prime Minister Tony Abbott as well as Brandis but not Turnbull - on Monday night and taken to Cabinet on Tuesday, after it had leaked to the media.

Telcos were similarly caught unaware, and criticised the Government for pushing through with legislation without consultation or informing industry of their obligations under the proposal.

The ministers today held discussions with Telstra to nut out a technical definition of the term metadata - one the Government has been unable to provide since announcing its plans to bring the policy into law.

Telstra confirmed it had met with the ministers and that they discussed issues relating to metadata and data retention, but declined to provide further comment.

iiNet and Vodafone both confirmed they were not involved in this afternoon’s consultation.

Optus declined to confirm its involvement but said it had been in discussion with Turnbull and “senior officials” throughout this week.

Despite being left out of today's talks, iiNet chief regulatory officer Steve Dalby, the most vocal critic of the plan, said he was comfortable that iiNet had been able to discuss the issue with Turnbull in a number of conversations in recent months.

Telcos have been forced to rely on a briefing paper offered by the Attorney-General’s Department in 2010 to understand specifically what data they will be required to store under the proposal, which seeks to retain certain non-content data generated by users for up to two years.

The Government has confused the issue by offering numerous accounts of what it constitutes as metadata, including in a Sky News interview last night in which Brandis claimed website addresses would fall under the scheme, contradicting comments he made in 2012 in response to Labor’s similar proposal advising that internet browsing history should be explicitly excluded.

In his first public comments since learning of the plan through the media, Turnbull today said public commentary had gotten ahead of the policy.

“There’s been a lot of speculation about what this might involve and I think that has gotten a little bit ahead of the policy where we are in a process of consultation and engagement,” he said in an interview with Bloomberg TV.

“Metadata means different things to different people so what we need to do is get to the end of our consultation, conclude the very, very clear parameters of our policy and then we can explain it and justify it.”

He said he had spoken at “considerable length and in technical detail” with the major telcos this week. However this afternoon's consultation with Telstra will be the first time Turnbull and Brandis formally meet with industry together on the issue.

The telco industry has claimed the scheme would force a significant financial cost on providers which would need to be passed on to consumers.

ISP iiNet has previously put the cost of the scheme at $100 million in the first two years.

Turnbull said it would not become clear who would bear the cost of the program until consultation were finished, despite the Government previously saying it it would not foot the bill.