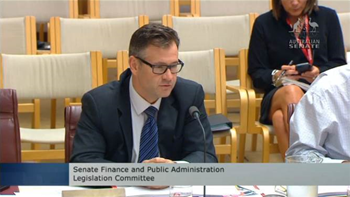 “The Prime Minister in fact wrote to our minister [assistant minister for digital transformation Michael Keenan] and asked us to have a look at blockchain, which evolved into this particular piece of work,” he said.

Alexander said this had been prompted by “a number of conversations with ministers and officers, and that a number of agencies had commenced looking at blockchain”.

“Lots of vendors were [also] coming to government and talking about blockchain.”

The DTA was handed $700,000 in this year’s federal budget to find uses for blockchain technology over the coming year.

Alexander said this would involve the agency understanding how blockchain can work and whether there “really is a value proposition for government”.

It has already indicated that welfare payments will be a target of its investigation, drawing upon the existing application of the technology in both public and private sectors.

But Alexander said the agency was also looking at blockchain for the “settlement of trades, cargo management and even the providence of open data to ensure that it is accurate”.

The agency has also commenced a separate project with the "Commonwealth Bank and a number of players to have a look at how blockchain might work in the financial services sector".

Alexander also revealed that a total of eight Govpass digital identity pilots were expected to take place during 2018-19.

“We expect around 100,000 people will use that from October to the end of the financial year, Alexander said.

Other services “for students, for welfare recipients and businesses” are currently being considered by government.

The agency received $92.4 million in this year’s budget to “accelerate” the delivery of its Govpass digital identity platform.

Alexander said the funding would allow the agency to move from "policy development, discovery, problem solving, and alpha prototyping to a live beta where it will test [Govpass] with actual citizen's and business' digital identities."

“During this year that funding will allow us to deliver that digital identity service ... to almost 400,000 Australians to use and test as we plan to scale that out much more broadly," he said.

About 2.8 million transactions will eventually move online as a result of Govpass.