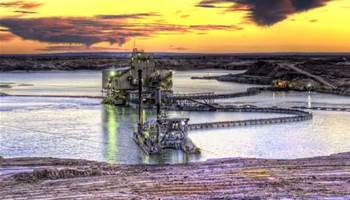 The pond at Cooljarloo (courtesy: TRONOX)

Titanium minerals miner TRONOX has overhauled the way it collects and surfaces historical process data from floating plant at its Cooljarloo South mine in Western Australia.

The company, formerly known as Tiwest, uses two large floating dredges — Cooljarloo 1 and Pelican — in a purpose-built pond to pump slurried ore to a floating concentrator, which recovers heavy minerals from the sand and clay.

Each floating plant has a rack housing an Experion SCADA server — the process control system that drives operations at TRONOX — and now also a MatrikonOPC Buffer, which pulls plant performance data from Experion at regular intervals.

The buffer then transmits the historical plant data at intervals of between five and 10 minutes over wireless links to an administrative office, where it is stored in a central data historian 'hub' and can be interrogated by engineers.

Process-intensive industries such as mining and resources typically use data 'historians' to determine the state of plant in the lead-up to an incident or problem, or to locate trends in operations data over time.

"One of the times when a historian really comes in handy is when something has happened — there's been a failure of some sort and the engineers want to know how the plant was running just before the failure happened," TRONOX information systems analyst Lee Albert told iTnews.

"Most of the time when those events happened, it was really difficult for engineers to piece together a sequence of events, for example to establish pressures [and] flow rates before something happened.

"They'd get differing versions of what happened from different operators [of the plant] so there was just no one view of the truth."

Prior to deploying a fit-for-purpose data historian, TRONOX used an existing capability within its SCADA system that interrogated plant data based on pre-defined tags and stored it in a series of historical files.

However, the size of each file was limited, and once a file hit its storage limit, it started dropping older information in order to make room for the latest data being captured.

"You can imagine them as a ladder — it fills up and then the one on the bottom drops off, so the next one can come in at the top," Albert said.

After joining TRONOX, Albert configured Experion to periodically copy any full history files to another part of the Experion server.

This resolved the issue of losing historical data to Experion's overwrite mechanism, but physical disk space limitations on the Experion server meant the historical archives could not stay there forever.

Experion is set up for process control. Its configuration would not allow a peripheral function — the storage of historical data — to compromise disk space required for critical plant operations.

"The Experion software's primary focus is always performance and speed at controlling the plant, and it won't allow history, for example, to compromise that," Albert said.

"Within the history configuration, Experion forces you to say at which point it must stop archiving when disk space starts to become short, because it's not going to let you compromise the system by filling up its disks.

"Basically, if you did not move your copies of the history files that you're keeping for posterity off the Experion server, you would eventually fill up the hard drive and archiving would stop, so that means your current history isn't being collected other than in the working file, but that's getting overwritten as the working file fills up."

Albert got around this by wirelessly copying the full historical files from the SCADA servers on the pond to a central business file server in an administrative location.

Storing the archives in a different location to the point at which the historical data was being collected raised a further challenge.

Engineers that wanted to interrogate the historical data had to do it "in station" — that is, on the pond, with the Experion software and screens used by the plant operators.

The Experion software would only interrogate the trend data in the working history file, unless it was told specifically to also include other archived historical data.

"If you want to look at a graph of pressure over time for a certain point in the plant, that history will only show whatever's in the working history file unless you know where to go and look for the previously packaged away file, copy and paste it into a certain directory, which then tells Experion to look not only at the working file for the history but at any other files that might be in that history restore directory," Albert said.

"If you're feeling confused with me trying to explain this, you can imagine how these engineers used to feel, particularly as they wouldn't be doing this on a regular basis.

"When the engineers needed to ask these questions it was under time pressure. Something had happened and they needed to fix it fast or find the cause fast."

Inevitably, IT assistance was required to facilitate data access.

The impetus to roll out a data historian at Cooljarloo South came from a process engineer who had previously worked in TRONOX's dry mill operations before accepting a role as production superintendent at Cooljarloo.

Unlike the South operation, the dry mill had a state-of-the-art data historian — Honeywell's Uniformance — and Albert said he suddenly "found himself in a higher role ... but without access to plant history through a historian".

TRONOX couldn't justify the cost of expanding the Uniformance system to the South mine, which would have involved buying costly licenses for each of its Experion servers.

Instead, TRONOX settled on an OPC hub-and-spoke system from MatrikonOPC. OPC is an open productivity and connectivity standard for industrial automation.

The 'spokes' in the architecture are buffers — servers that sit adjacent to the Experion hardware that collect the plant data and store it for archiving.

The data is drawn back to a central administrative 'hub' using OPC historical data access (HDA), which "allows the scheduled transfer of slices of data back to the admin building every five or 10 minutes or so", according to Albert.

Historian data can be interrogated either from the administrative point or on the plant.

"Someone can be on the plant and query the buffer directly if they wanted to, and that would be quicker because the data wouldn't have to travel across the wireless links," Albert noted.

"The data would also be more up-to-date [from the buffer] because there's a potential for about three minutes of missing data [where] something's happened but I haven't grabbed it yet up at admin."

In practice, Albert said most engineers now queried the historian from the administrative building, rather than out on the pond.