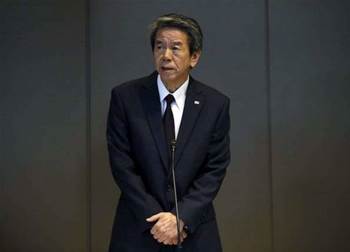 Toshiba's chief executive Hisao Tanaka and a string of other senior officials have resigned for their roles in the country's biggest accounting scandal in years.

Tanaka will be temporarily replaced by chairman Masashi Muromachi after an independent inquiry found the CEO had been aware the company had inflated its profits by US$1.2 billion over a period of several years.

"I see this as the most damaging event for our brand in the company's 140-year history," Tanaka told a news conference after making a ritual deep bow of contrition to a flurry of camera shutters and flashes.

"I don't think these problems can be overcome overnight."

Muromachi is considered a safe pair of hands to lead Toshiba through its current turmoil before handing the reins to a successor. The company plans to announce next month the delayed business results for the financial year ended in March.

Tanaka's predecessors as presidents of the laptops-to-nuclear conglomerate, vice chairman Norio Sasaki and adviser Atsutoshi Nishida, will also step down after the third-party report showed they played a part in the overstatement of profits going back to the 2008 financial year.

A total of eight officials resigned and Tanaka said that the company is now considering appointing outside directors to over half of its board seats.

A report by an outside panel of accountants and lawyers said Toshiba had overstated its operating profit by 151.8 billion yen (A$1.7 billion), roughly triple Toshiba's initial estimate.

Tanaka and Sasaki pressured business divisions to meet difficult targets and knew they were overstating profits and delaying the reporting of losses, amid a culture of not going against the wishes of superiors, the report said.

Koichi Ueda, an attorney and head of the panel, said he was surprised by what they had found.

"That a company that represents Japan, to be doing something like this institutionally, was shocking," he told reporters.

Tanaka did not dispute the findings, but said he had no intention of encouraging accounting irregularities.

"It's not my understanding that I gave orders for improper accounting, but the reality is that such an observation has been made," Tanaka said.

The findings are expected to lead to the restatement of earnings and potentially hefty fines in Japan's worst boardroom scandal since Olympus was found to have covered up US$1.7 billion in losses.

Aso declined to comment when asked if Toshiba would face any kind of financial penalty. Sources have said regulators were beginning their own review of Toshiba's book-keeping.

Some analysts have voiced concerns that there could be more issues ahead, including a possible writedown on Toshiba's Westinghouse nuclear business which was not a major target of the latest probe.

A Toshiba executive brushed off suggestions that the US$5.4 billlion the company invested in Westinghouse in 2006 had weighed on its finances and led to improper accounting, saying the business was doing well.

Shares in Toshiba rose 6 percent on relief the report had few nasty surprises. But they are still down over 20 percent since Toshiba first disclosed cases of accounting irregularities in early April.

Rating Agency Standard & Poor's said the required restatement of Toshiba's profit could lead to its credit rating being downgraded.