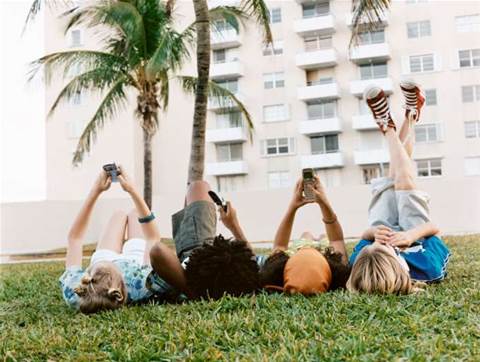 The gadgets on display at this year's mobile expos say it all. Short messages: your 160-character limit rule has come to an end.

Since its inception in 1985, the short message service (SMS) has taken the world by storm. Today, SMS is used to communicate anything from teenage flirting to corporate advertising, and has been blamed for the demise of vowels in an abbreviated language variant dubbed 'txtspk'.

One trillion text messages were sent in the U.S. last year, according to CTIA, which is triple the number sent in 2007.

In Australia, 6.9 billion text messages were sent by Telstra users alone during the financial year 07-08, representing a 42.2 percent increase from the previous year.

But as mobile broadband has become more pervasive and new smartphone platforms (such as the iPhone and Android) have empowered independent application developers, consumers now have access to far greater choice on which technologies they use for mobile messaging.

iTnews rounds up the five most likely usurpers to the short message throne.

When Skype launched an application for the iPhone this month, it clocked a total of 600,000 downloads within its first 48 hours. Skype is currently the top iPhone download in more than 40 countries around the world, including Australia.

Instead of the traditional per-SMS charge, users incur only data access charges when sending and receiving instant messages to and from the 400 million users other Skype users worldwide.

Skype also has launched mobile applications for the Blackberry and Windows Mobile. Its 3.0 beta version for Windows Phones includes a function that delivers SMS messages via WiFi at discounted rates.

An SMS message to an Australian mobile costs $0.136, in addition to any data charges from the user's mobile operator.

Skype has not disclosed how much data is typically consumed by an instant message or SMS, and recommends an unlimited data usage plan as it expects data charges to vary depending on users' rate plan and network operator.

Talki is a small, downloadable application for mobile phones that delivers SMS, MMS and voice calls over an Internet connection.

The application works on any Java-enabled phone with an Internet connection and seamlessly delivers messages via either the Talki network or SMS. Messages sent between Talki users are delivered free of charge. Text or picture messages to non-Talki users anywhere in the world are delivered via standard carrier SMS networks and cost five Euro cents (AUD$0.09).

Unlike most instant messaging services that require users to set up a username and password-protected account, Talki operates on the premise that the user's phone number is a sufficiently unique identifier.

Talki is developed by Canadian mobile communications company, Talkster and currently boasts "hundreds of thousands of users from the U.S., U.K., India and South Africa".

The application hasn't yet been actively advertised in Australia; however, it already has "several thousand users"in the country with the service spreading by word of mouth, according to Talkster president and COO James Wanless.

Besides building the Talki brand, Talkster also plans to grow the application's userbase via partnerships with mobile virtual network operators, whose SMS pricing has been limited by network providers so far. Wanless expects to be announcing some "gamechanging" deals" by the end of Q2 2009.

While he noted that carriers' bundled data offerings have sufficiently lowered the price of local SMS for users, Wanless said Talki is likely to fill a gap in the market for international messaging.

That's where Meebo comes in.

Meebo allows users to access several instant messaging accounts at once from a single browser- or smartphone- based application. It supports a wide range of protocols, including Google Talk, AIM, MSN, Yahoo! Messenger, MySpace IM, Facebook Chat, ICQ and Jabber.

The Web-based application was launched in September 2005 and currently serves more than 40 million people worldwide. It is free to use and funded by advertisements that appear in the background or at the bottom of a chat window.

Currently, Meebo is accessible via the mobile Web browser of the iPhone, iPod Touch, and Nokia's range of Internet Tablets. Users of Android-based smartphones can access Meebo via a downloadable application.

Push e-mail closes the gap between e-mail and SMS by actively notifying users of new mail as soon as the e-mail client receives it.

The technology was popularised by Research In Motion's Blackberry in 2002. It is now supported by smartphones running on Palm, Windows Mobile, and Google's Android operating systems, as well as on the Apple iPhone and some Sony Ericsson and Nokia devices.

Barcelona-based application developer Brane Labs offers a push-email application called Mobiquus that can be downloaded and used for free on any Java-enabled mobile phone.

The application retrieves e-mail from various service providers, including GMail, Yahoo! and AOL mail, and delivers new messages to the device via an Internet connection.

Push e-mail may have replaced SMS in the hearts and minds of some technologists, including Google's Strategic Partner Development Manager Jon Steinberg, who twittered last month: "I don't totally understand why people with email capable devices use SMS. Is it because they don't have push email?"

For other users, however, SMS and email may continue to serve separate functions, with short messages being used to relay urgent notifications and email catering to more general communications.

These days, smartphone users in want of software need look no further than handset vendors' online application stores, which open doors to a wider range of independent developers than ever before.

In the newly democratised market, users are likely to find ample supply of applications. On the messaging front, AIM, ICQ, Windows Live Messenger and Yahoo! Messenger have received the most attention on Blackberry App World. Meanwhile, twitter client Tweetie, SMS application iTXT and instant messaging client AIM have been most popular with users of the iPhone and iPod Touch.

The recently launched iPhone 3.0 operating system has given messaging applications yet more functionality with the addition of a push notification service which, like push e-mail, allows background applications to alert users of new information via sound or text.