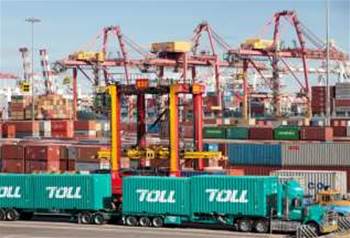 The trial is one of a number of IT investments that the company is making to improve safety, customer service and productivity across its operations.

In its annual corporate social responsibility report, Toll said the fatigue system had not only reduced risk but also "allowed our onsite operations to organise crews and rostering to further reduce the risk of fatigue".

Although Toll has previously stayed fairly quiet on some of its larger IT projects, the company provided a brief glimpse into its workings in its FY12 results, breaking down its capital expenditure on IT for the first time.

Of that $41.1 million went on "sustaining" works - IT updates made in support of Toll's existing customer base - while a further $13.6 million went on IT to support new contracts "or provide further capacity for growth".

One of the projects that featured briefly was Project Unite, a five-year program in Toll's Global Express business that ultimately aimed to bring the IPEC and Priority businesses "closer together from a customer perspective".

Works are currently underway for release 2.5 of the project, although it is unclear what is encompassed in this body of work.

Previous attempts by iTnews to gain comment on the details of Project Unite were declined.

Other IT projects in train include implementing item-level freight tracking for Toll's Specialised and Domestic Freight business.

Devonport said the tracking system would provide "a capability of track and trace for palletised freight, which doesn't exist today, enable improved accuracy of freight handling and assist in reducing depot inefficiencies".

Toll also planned to kick off an IT project in its Domestic Forwarding and Specialised and Domestic Freight businesses, to improving customer experience of pick-up and delivery services.

"This will likely commence in the new financial year," Devonport said.

Overall, Toll recorded a net profit after tax of $71 million, down almost 76 percent on the previous year due to asset writedowns.

Without the one-off expenses, net profit after tax was down 5.9 percent year-on-year to $274 million.