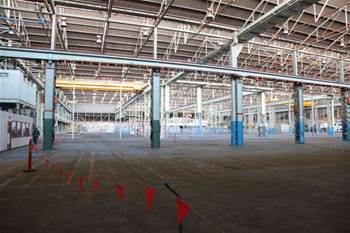 A world-first for Dell's next generation of modular data centres in Adelaide.

Australian data centre start-up Tier 5 today launched a multi-million dollar facility in Adelaide that is the first in the world to utilise Dell's third generation of modular data centre technology.

As reported exclusively by iTnews in March, the Tier 5 team - led by Hostworks founder Marty Gauvin - has been constructing an 8mW data centre within a 4000 square metre building and attached 15,000 square metre parcel of land at what used to be Adelaide's Mitsubishi car manufacturing plant.

Tier 5's Adelaide facility - the first of several the company plans to build in capital cities around Australia - is the first in the world to use Dell Data Centre Solutions' (DCS) third-generation of modular data centre fit-out.

Dell's third generation uses this same concept - but ditches the enclosed container. Instead, it is a family of kits that data centre builders can snap together in a modular fashion. These kits are sold according to the redundancy level required - with "everything from Tier II to Tier IV military-spec" on offer.

Today, Tier 5 demonstrated how the various pieces of a kit - an 'IT PAC' of servers, an air handling pack for cooling and a UPS pack for redundancy - could be shifted in and out of place via a small crane and rails running along the factory floor.

"The beauty of this configuration is that a module can be pre-integrated somewhere else and moved to the data centre," Gauvin said. "An organisation in an NBN [national broadband network] connected world could maintain a consistency in their infrastructure and deploy the same configuration right out to the edge of the network."

Gauvin told iTnews that this more flexible approach allowed Tier 5 to fit in "anything up to a mainframe" in the modular configuration.

The 4.5 metre tall DCS modules can fit in racks 54RU high. With a few additional smarts thrown in, Gauvin expects Tier 5 could squeeze 100, 1/2 RU servers in every rack and still have space for switching equipment. That equates to up to 1200 servers in a module.

If all customers take up Tier 3 configurations, Tier 5's Adelaide facility will have cost $100 million to build.

Tier 5 will operate the data centre as "owner and manager of wholesale data centre space" to organisations that require one megawatt or more of capacity, Gauvin said.

That would equate to a maximum of eight customers - be they large corporate and Government clients, outsourcers, telcos, ISPs and other service providers - that have at least 4,000 servers in need of hosting.

The company is building a row of offices adjacent to the 4000 metre square building on the site, on top of which Tier 5 will sit extra data centre plant. Combined with a large basement, this real estate will ensure that nearly all of the 4000 square metres will be server room floor - enough to squeeze in some 22 small modular data centres.

As previously reported in iTnews, Gauvin was attracted to the 25mW power plant located on-site at the Mitsubishi car factory. This should allow Tier 5 to offer 7.5 kW to 15 kW per rack on average, with a per-rack peak of 30kW.

"If every customer asks for 15kW per rack, we could do it," Gauvin said.

The Adelaide data centre will also make use of free cooling technology.

"People think of Adelaide as being hot," Gauvin told iTnews. "But we've become weather experts lately. Adelaide only exceeds the temperature required for using free air for around 200 hours a year."

Tier 5 will use free cooling for almost 98 percent of the year, but switch over to traditional close-loop chilled water cooling for when the mercury rises or if there is a dust storm or bushfire that would threaten air quality. Similarly, the facility has the capacity to mix exhaust air with outside air when the outside air is too humid and/or cold.

Gauvin expects the facility will operate at a power effectiveness (PUE) rating of 1.18 - consistent with industry best practice.

The data centre features network links to Telstra, Optus and NextGen (already on-site). Tier 5 also has agreements in place to also connect to Amcom and Internode, and to build redundant links to Telstra and Optus by March 2011.

Gauvin said that now people can come and tour the Adelaide facility, he can start thinking about national expansion.

"We've already had quite a bit of interest in Canberra, Perth and Brisbane," he said. "At the end of the day - which ever can present a requirement of 3mW by mid-2011 will get one next. It depends who asks for it first."