The hidden cost of the new $10 note 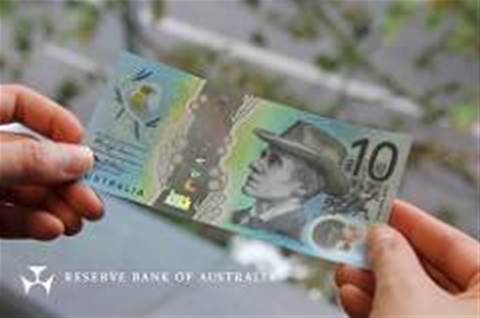 Supermarket giants Woolworths and Coles believe their self-service checkouts will cope with the new $10 note released this week, but many other machines that accept currency won’t be ready, iTnews can reveal.

Many of the estimated 100,000 plus vending machines that operate in Australia will unlikely be ready to accept Australia’s new $10 banknote when it enters circulation this week, according to the national vending association.

Meanwhile, the operators of pokies, betting terminals, parking meters, ATMs, change machines, self-service checkouts and car washes are racing to get their equipment ready to accept the note on time.

The new $10 note — which contains upgraded security features, a clear top-to-bottom window, and a tactile feature so that it can be recognised by vision-impaired people — will be released into general circulation from Wednesday onwards.

It follows the release of the new $5 note last year.

Supermarket giant Woolworths, which wasn’t ready in time for the then-new $5 note last year, told iTnews it was confident its point-of-sale machines would accept the new $10 note on launch day this time around.

“Woolworths and BIG W self-serve checkouts have been updated with new software in preparation for the new $10 notes,” a Woolworths Group spokesperson said.

“We undertook thorough testing ahead of the new tender's launch date to ensure our self-serve checkouts are ready to go.”

Rival supermarket Coles also said it had worked closely with the Reserve Bank of Australia (RBA) to ensure its point-of-sale systems could recognise and accept the new $10 note.

It added that it “did not experience any problems” accepting the new $5 note when it was introduced in 2016.

“We are confident our systems will be able to accept the new $10 notes at all checkouts nationally,” a Coles spokesperson said.

A Kmart Australia spokesperson said it was ready for the new note's arrival.

In addition, a Transport for NSW spokesperson said it had "updated its Opal top up and ticket machines to accept the new $10" note.

But not all payment equipment will be ready from day one. iTnews can reveal that Tabcorp as well as vending machine operators are still working on upgrades.

“Pending regulatory approval, we aim to electronically update the terminals in mid- to late-October,” a Tabcorp spokesperson said.

“In the meantime, customers in venues can exchange the new notes for the older $10, or for smaller denomination notes, for use in the terminals.”

Nick Aronis, president of the national vending association, told iTnews that despite vending machine operators and vendors being given six months to prepare for the new $10 note, it was unlikely most machines would be ready to accept it straight away.

“As the current $10 note will remain in circulation for some time, the urgency is not there to have everything updated,” Aronis said.

“It is up to the individual operator, company and industry to have this in place as the need arises as well as affordability.”

One Australian vending machine operator iTnews spoke to, who didn’t wish to be named, said as of last week it was still waiting on its equipment supplier to provide it with the necessary $10 note firmware patch to deploy on its hundreds of machines.

The operator said they had to pay a license fee for each machine’s firmware to be upgraded and were required to visit each machine in-person to upgrade it.

Aronis estimated that it cost the vending industry $20 million alone to update their machines to accept last year’s new $5 note. He estimated the new $10 note would cost about $4 million.

“The biggest impact to the industry was the new $5 note,” Aronis said. “Since then the biggest expense of updating the actual note readers to accommodate new currency and future updates has already occurred.”

When asked what more the RBA could do to assist in the speedy upgrading of machines and equipment across the industry, Aronis said financial support would help.

Aronis also said it would assist operators if they were given different batch variables of notes earlier on so that they didn’t have to continually adjust their readers to work with the different variances in notes, which may have minor changes in them from batch to batch that can impact their acceptance in machines.

“The notes have been provided on time from a batch [before their release],” Aronis said.

“[But] at this stage we are unsure what the variables will be on notes once they start producing various batches.

“To give you an idea, when the $5 note was released, the variances in it meant that the firmware tolerances had to be widened to accept the variances from batch to batch.”

Despite this, Lindsay Boulton, the Reserve Bank of Australia’s assistant governor for business services, told Fairfax Media on Monday that he expected there would be fewer issues this time around but said it would depend on the business decisions of manufacturers and operators.

Even if some operators have updated all their systems, the upgrade pain isn’t over yet. They have a new $50 note - the most widely circulated and counterfeited – to look forward to being rolled out next year.