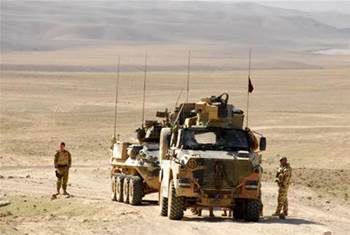 Defence engineering heavyweight Thales Australia is set to bolt counter-drone measures onto its Bushmaster vehicles to give armed forces a non-line of sight method to protect sensitive airspace from remotely piloted aircraft.

MESMER, named after early an early proponent of hypnotism Franz Friedrich Anton Mesmer, monitors unlicensed radio frequencies to passively pick up signals going between a drone and its operator.

Unlike other counter-drone devices such as those used during the Gold Coast Commonwealth Games earlier this year, MESMER doesn’t jam the radio frequencies being sent to the drone, nor does it rely on physical measures like bullets, nets or eagles to knock the aircraft out of the sky.

Instead, the Linux-based system can take advantage of protocol weaknesses and take command of the drone, either forcing it to land in a safe area or sending it back to its launch site.

The first mobile prototype for the system will be incorporated into the Bushmaster’s electronic warfare platform.

Thales and Microsoft unveiled in June a portable Azure stack for the Bushmaster to provide armed forces greater connectivity and end-to-end cybersecurity and encryption solutions for IT operations on the go.

The collaboration between Thales Australia and D13 was unveiled at Adelaide’s Land Forces event on Tuesday.