Telstra's use of cell on wheels trailers threatened 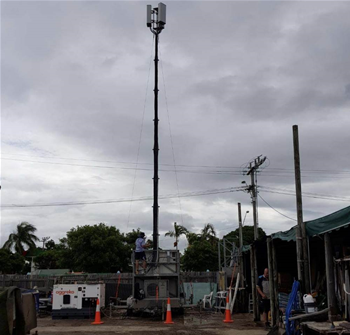 Telstra is concerned it could be unintentionally barred from deploying its cell on wheels (CoW) portable mobile base stations under new legislative instruments currently being proposed.

Law changes passed last year made it is easier for telcos to deploy certain types of temporary telecommunications infrastructure in “emergencies, peak holiday periods, and [at] major sporting, cultural and other events”.

But there's a glitch, the carrier reckons, and it stems from what is interpreted as “low impact” and therefore not subject to local planning laws or otherwise required to seek extra permissions (think councils) in order to operate.

With telco laws being essentially a federal affair, the former Department of Communications published exposure drafts of a new low-impact facilities determination (LIFD) at the end of last year.

Telstra said the proposed rules for a temporary above-ground facility, as they stand, would have the effect of prohibiting ongoing use of the carrier’s CoW trailers, which are often deployed to disaster-hit areas to get mobile services back online.

The CoW itself consists of a trailer with an extendable “pump up” mast and antennas on top.

However, the rules as they stand would prohibit a temporary above ground facility from also having a tower, as well as impose a total height limit of five metres.

“Telstra is concerned that the prohibition of a temporary tower (incorporated with a temporary above ground facility) … and the height limit … has an unintended consequence of prohibiting the use of a Cell on Wheels (CoW),” it said.

“Having applied the proposed amendments to case studies, it appears that the Telstra CoW … would not be permitted ... as its built-in pump up mast is incorporated into a temporary above ground facility.

“In addition, the CoW’s temporary antennas located at the top of the pump-up mast exceed five metres above ground, so do not comply with the height limit.”

Telstra has asked the department to change the proposed LIFD to remove what it sees as an “unintended consequence”.

It has also asked the government to make a further change to the rules to "expressly permit" carriers to run aerial cables to and from the temporary infrastructure.

"Carriers use aerial cables to connect temporary facilities and can generally do so more quickly than installing underground cables and with less environmental impact," it said.

Story update, 17/3: A Telstra spokesperson told iTnews, "We have had further discussions with the Department since lodging this submission and understand our concerns are being addressed".