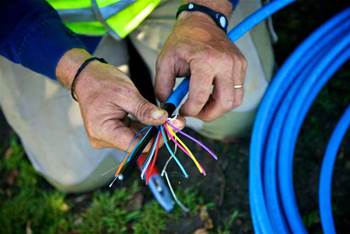 Telstra has agreed to notify ISPs within two hours from when NBN Co advises of the need to switch off a copper or cable service in order to connect a premise with fibre.

The agreement marks the end of several years of back and forth between Telstra and its wholesale customers over what constitutes an appropriate timeframe for notification when NBN Co needs to use the 'pull-through' method to connect fibre to a premise.

The method causes headaches for Telstra’s wholesale customers, such as AAPT, Optus and iiNet, creating service delivery and billing concerns while the existing line is disconnected.

Telstra had previously said it ‘expected’ it would notify the ISPs within four hours for 90 percent of impending disconnections, and within two business days for the remaining ten percent.

The proposal was met with anger from the wholesale providers as well as the ACCC, both demanding Telstra revise the notification time down to no more than two hours.

Telstra Wholesale customers claimed they would not be able to meet the service level agreements provided to their customers if Telstra was permitted such a long window.

AAPT and Optus argued that Telstra should be able to notify wholesale partners in under two hours after it had been advised of a pull-through by NBN Co - calls which were backed by the ACCC in December.

The competition watchdog formally warned Telstra to amend its draft agreement to ensure wholesale providers were made aware of an impending pull-through as soon as possible after Telstra was notified by NBN Co.

It asked Telstra to directly inform the ISPs “within minutes” of a notification, and offer a firm commitment to make 90 percent of notifications within one business hour, and within four hours for the remaining ten percent.

The ACCC today said Telstra had revised down its notification window to within no more than two hours in 90 percent of cases, and in under four hours for the remaining ten percent. AAPT welcomed the changes.

“Telstra considers this is a clearer commitment to achieve the target levels set for its performance,” the telco said in its amended draft measure.

“Telstra has now provided a firm commitment to notify wholesale customers as “soon as reasonably practicable” – the two and four business hour timeframes represent an absolute deadline by which Telstra must provide notice.”

The telco would not commit to a timeframe of less than two hours, claiming its staff couldn't be sure of the volume of notifications the telco might receive from NBN Co at any given time.