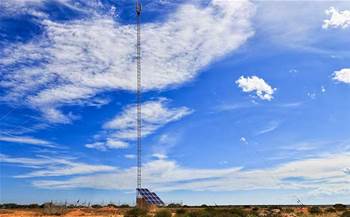 Not enough payoff to participate.

Telstra may take a backseat on future rounds of the federal mobile blackspots program, arguing new tower builds don’t make sense even when the government pays half of the upfront costs.

The telco - which has dominated the first four rounds of the program, nabbing “over 75 percent of sites” - suggested the program is “in part” a victim of its own success, with new towers progressively servicing fewer and fewer people.

“From rounds one to four, we have seen an 85 percent decline in the average number of customers receiving new outdoor coverage per site,” Telstra said.

"The declining numbers of customers per site means the revenues a carrier can earn from each blackspot are low, and we are now at a point where revenues are insufficient to offset the operational costs of the sites, particularly in NBN satellite areas."

There are still two rounds to go in the blackspots scheme.

Sites in the fifth round are currently under review, while a sixth round with $80m of funding available is yet to open.

Based on Telstra’s commentary, the government could find it harder to attract proposals from telcos, particularly for blackspots in the final round.

In addition, with the government set to fund a new regional connectivity program to the tune of $53 million, it may need to put even more on the table to secure proposals from telcos.

Telstra wants the government to uncap its contribution, and also to consider contributing to the operating expenses (OpEx) cost of the towers over 10 years to make addressing blackspots more attractive again.

“Whilst the current contribution approaches taken by federal and state governments has made the delivery of some remote sites possible, the viability of these projects is diminishing under current government contribution models,” Telstra said.

“It is our assessment that we have reached a point where the share of federal, state and third-party contributions relative to carriers’ will need to be higher in order to maintain the momentum seen in previous regional co-investment programs.

“Addressing this challenge will require the government to exercise the flexibility to increase its contribution beyond the 50 percent cap, especially where projects provide substantial benefits to communities but cannot attract funding from sources beyond the carriers.

“We therefore recommend that the federal government does not set a cap on its contribution.”

"These contributions can have the added benefit of accelerated solution delivery (for example access to tower space, or zero land rental fees)," Optus said.

"Similarly, non-traditional contributions (such as free power connection) should be considered."