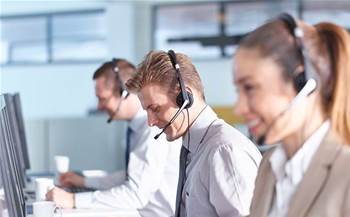 Telstra used artificial intelligence software to vet more than 19,000 people vying for 1000 temporary contact centre roles over the past fortnight.

The telco’s group executive for transformation, communications and people Alex Badenoch revealed the extraordinary response rate to the callout on Wednesday afternoon.

Telstra announced plans to hire 1000 temporary contact centre staff on March 20 and started recruiting for them the following week.

They are being brought on to add capacity in Telstra’s domestic contact centres, offsetting the closure of offshore operations in countries impacted by stringent lockdowns.

“Processing and interviewing 19,000 applicants and making offers to the first group within two weeks has been possible through the use of AI and the algorithm we’ve programmed specifically for these roles,” Badenoch said.

All candidates were asked to record a video interview based on a series of behavioural questions.

“Our AI software converts the candidate’s spoken responses to text and reviews all answers against the required skills for these roles,” Badenoch said.

In addition, a “game-based cognitive test that measures candidates against the skills needed for the role” was then used to further shortlist candidates.

“The AI takes the information provided in the video interview and the cognitive skills game and categorises candidates based on an assessment score,” Badenoch said.

“Those in the top-tier progress directly to hiring managers for review, without the need to involve a recruiter, while those in the tier below go to a recruiter for further assessment.”

Badenoch said the AI software allowed faster processing of candidates while also ensuring “any bias or subjectivity is removed from the process upfront.”

In potentially good news for those that were unsuccessful in the initial round, Badenoch said today that Telstra now needed another 2500 people, who will be brought on either as direct hires or via partners “so we can get people on board as quickly as possible for our customers.”

“These new jobs will be a mix of contact centre and back of house specialist roles covering a range of activity like customer service, order provisioning and testing, as well as team leaders,” Badenoch said.

These new roles are in the same six existing locations of Telstra’s domestic contact centres, as well as in Newcastle, Perth and Sydney.

However, she noted that “a lot of these roles will be flexible as many of our new recruits will be working from home so we’re absolutely open to having more people in regional Australia.”