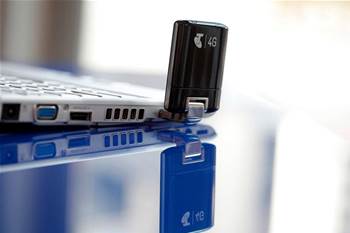 Telstra has revealed plans to launch its first commercial Long Term Evolution services this month, with the first compatible devices to be sold from 29 August.

The upgraded network, announced in February, would initially provide LTE coverage in a five-kilometre radius of the Sydney, Melbourne and Brisbane central business districts.

It followed ongoing testing of the network since the first active services became internally available at the three cities in May.

The network would be made officially available to 2000 managed business and government users through a dual-LTE and HSPA broadband modem.

"The commercial pilot will give some of our customers a taste of the faster speeds, greater capacity and quicker response times that can be available for mobile services on 4G," chief executive David Thodey said in a statement.

The modem would be available starting from $49 a month with 7 GB of included data quota.

The telco expected to make the network available in all state capitals and "selected regional centres" by the end of the year.

Telstra has been reluctant to reveal what speeds end users would be able to see over the network.

Competitors were expected to follow suit on their respective plans for LTE rollouts, with vividwireless and NBN Co both making headway in the past week.

Rival telcos Optus and VHA had signalled plans for their own fourth-generation networks but had yet to commit to timing.