Telstra shareholders: Give us a fair price 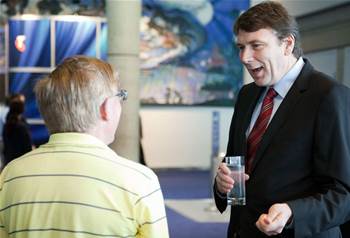 Telstra shareholders have expressed disgust at the Federal Government's plan to separate the company during its annual general meeting.

Other shareholders expressed concern over negotiations between Telstra and the government aimed at vending in assets for the National Broadband Network (NBN).

Joan Templeman, a Telstra shareholder, said she was "quite angry" at the way the government were "holding a gun at Telstra's head".

"If it wants to take-over Telstra's assets to build its own network I think they need to pay a realistic price for them," she said.

Telstra CEO David Thodey could not promise shareholders a "mutually acceptable agreement" with the government.

"Can I promise that a mutually acceptable agreement will be reached? No.

"Do I think there is a pathway to such an agreement? Yes," Thodey said.