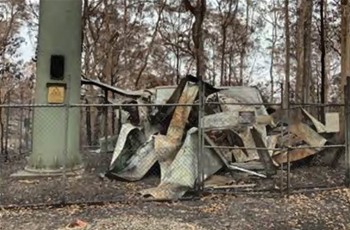 Few assets, such as this mobile facility at Surf Beach in NSW, were fire-damaged. (Credit: Telstra)

Root cause not always easy to determine.

Telstra has revealed that 329 network facilities suffered over four-hour outages due to bushfires over six weeks last summer, though only around five were the direct result of fire damage.

Over 70 percent of the outages were in NSW with a further 22 percent in Victoria and the rest in South Australia, the telco said. [pdf]

About one-third of the facilities related to the mobile network while the rest were for fixed-line, Telstra said.

However, it noted that Telstra-supplied facilities used by NBN Co were not included in the tally. “Only NBN Co is able to provide a comprehensive view of impacts to its network facilities,” Telstra said.

The vast majority of facility outages between December 19 last year and the end of January 2020 were the result of all power to the site being lost.

“Mains power loss was due either to the proactive de-energisation of the power grid to reduce fire risk, or to power infrastructure damage caused by fire,” Telstra said.

In NSW and SA, fire damage was the root cause of network facility outages in only “1.4 percent and 4.5 percent of cases respectively,” Telstra said.

However, a not insignificant number of outages were attributed to “other” - which Telstra explained meant there were “multiple possible contributing factors, including power outages, fluctuating power (power going on/off in quick succession), hardware failure and/or high temperature.”

“In these instances, it is often not possible to say with any certainty which factor(s) were the root cause.”

Telstra said its response to the bushfire crisis was organised around “three-day, three-week and three-month time horizons”.

These corresponded to periods of crisis response, service restoration and network recovery respectively.

Much of Telstra’s experience in this regard appears to be reflected in an industry submission to the Royal Commission into National Natural Disaster Arrangements.

Telstra made much the same recommendations as the broader telco industry did, seeking - for example - better information from utilities and deeper visibility into rapidly evolving fire situations.

Telstra said it often picked up information on electricity services from public sources, and there were instances where it sent truck rolls with generators based on outdated information.

“Apart from the potential for wasted effort transporting and connecting a generator at a site just as power resumes, it can also put our staff at greater risk attempting to reach such sites, and / or may tie up [emergency services] unnecessarily in providing escorts into affected areas,” Telstra said.

“An example of the benefits of early notification of de-energisation occurred during the recent bushfires in North East Victoria.

“The relevant energy provider notified Telstra (through the State Control Centre) that power was going to be turned off to the town of Euroa, through which one of Telstra’s inland inter-capital transmission links runs.

“In response to that notification, the Euroa site load (i.e. energy requirement) and battery reserves were quickly assessed, and a generator capable of supporting the network and on-site facilities infrastructure was deployed to site within four hours.

“It is also important that we are informed when re-energisation is going to occur, to ensure we do not deploy a generator to an affected site shortly before mains power is turned back on.”

Telstra said that improved information flows between energy providers and telecommunications providers would allow telcos “to better manage and predict disruptions to their networks, and to coordinate the deployment of limited resources across their networks, with the aim of minimising service disruption to customers in critical times.”