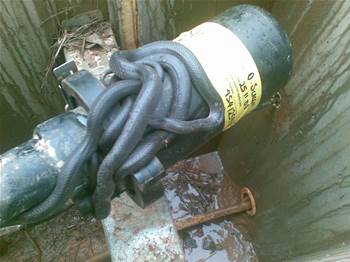 Telstra has increased the number of Queensland exchanges it's saying are 'no go' zones for technicians to 262.

As the flood crisis worsened the state, three-quarters of which was declared a disaster zone, Telstra Wholesale has progressively increased the number of exchange areas classed "red zones", from 75 on Monday to 237 Tuesday to 262 yesterday.

"Amber zone" exchange areas where limited, safe repairs could be carried out increased from 152 to 199.

The telco said that the Edison and Ipswich exchange areas were at "significant risk from flooding or power loss" and that it was doing what it could to protect them.

And it said that Fortitude Valley was at "moderate risk" of floods or power cuts.

"Telstra is well resourced and ready to respond, but there are many affected sites which are now under restricted access due to flooding," the company's director of service delivery in the northern region John Parkin said in a separate statement.

"When possible, and when safe to do so, Telstra crews will move in to restore services."

Telephone customers relying on AAPT circuits still had problems caused by flooding in one of its points of presence and to the basement of a co-location data centre.

iTnews reported yesterday that at least two of the telco's facilities had either reverted to back-up power or been powered down altogether.

"AAPT are still down in Brisbane city which has cut of our core link into their systems for incoming calls," a customer, FaktorTel, said in an issue advisory earlier today.

"We have been in contact with AAPT this morning and are awaiting information from network engineers on any possible ways to reroute [or] divert through to damage."

FaktorTel said it had been assessing with AAPT "the possibility of rerouting off the Eagle Street exchange to [the telco's] generator backed-up secondary site".

"These are hardwired major interconnect connections; however FaktorTel is pushing to have these moved," it said.

Optus said that as of 1pm yesterday there were "localised" impacts on its fixed and mobile networks.

It said that "several nodes" of its hybrid fibre coaxial (HFC) network had been affected in Ipswich and that one of its Sydney to Brisbane backhaul links had been cut near Helidon.

"However, all protected services have been switched successfully to our coastal link, so residential and business customers have not been impacted," Optus said.

Optus has since posted an update on its network assets here.