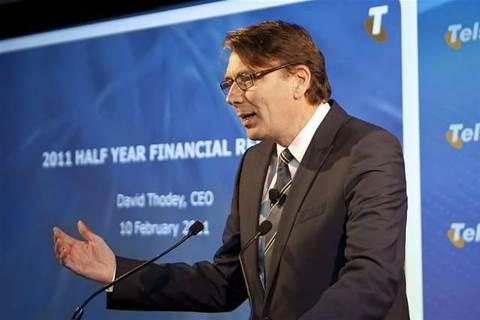 Telstra claims to have finalised a set of "key commercial terms" with NBN Co that it says will help frame a definitive agreement it is working to finalise by July 1.

Chief executive David Thodey [pictured] said today that the "very important milestone... sets the framework so we can document the definitive agreements" the two companies have been negotiating since June last year.

If reached, a definitive agreement would provide NBN Co with access to Telstra's passive infrastructure (pits, ducts and backhaul fibre) and eliminate Telstra as a fixed-line wholesale competitor to the NBN, while adding about $9 billion in post-tax value to Telstra's coffers.

"We are making good progress towards the finalisation of these negotiations," Thodey said.

Thodey said Telstra was sticking to an "ambitious target" of putting the agreement to shareholders on July 1, 2011.

Meanwhile, Communications Minister Stephen Conroy held a press conference in Canberra to say that he was "very pleased" to welcome Telstra's announcement.

"The commercial terms pave the way for a final agreement to allow NBN Co to use Telstra’s assets to roll out the NBN and for Telstra to decommission its copper network," Conroy told reporters.

As previously announced, the Government will make initial funding injections of $50 million a year in 2012-13 and 2013-14. This will increase to a $100 million a year thereafter.

Thodey, meanwhile, reminded analysts that once negotiations are complete, Telstra shareholders will have the opportunity to vote on the agreement at its extraordinary AGM expected to be held on 1 July, 2011.

He said that there were still a number of outstanding elements - such as legislation still before parliament - that could have an impact on that timeline.

Competition watchdog the ACCC must also scrutinise the agreements as to whether to accept Telstra’s structural separation undertaking.