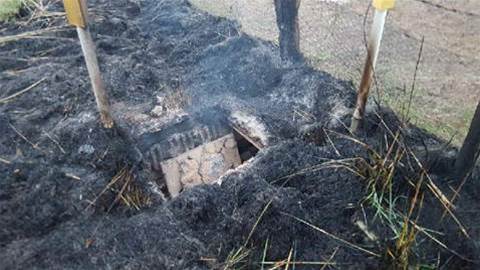 Fire investigators have ruled out a lightning strike as the cause of a blackened Telstra pit in regional NSW earlier this month that disrupted Triple Zero emergency calls.

The NSW Rural Fire Services yesterday said it had completed its investigation of the fire at Lewis Ponds near Bathurst.

“The investigation has eliminated all causes, with the exception of electrical infrastructure
(powerlines) and arson.”

NSW RFS chief superintendent Ben Millington said yesterday that there was "no lightning in the area at the time".

"That certainly has been ruled out following an analysis of data and information provided by the Bureau of Meteorology," he said in comments reported by SBS.

The NSW RFS report has been supplied to both the NSW Police and Telstra.

It contradicts statements made by Telstra in the immediate aftermath of the fire on May 4.

"There is significant fire damage consistent with a lightning strike," the telco had said.

The fire damaged equipment that connected through the pit, including important fibre cables that carried Triple Zero services.

How one cable could act as a single point of failure on Triple Zero service provision remains an open question.

The government has already committed to investigate the incident, given its unusual nature.