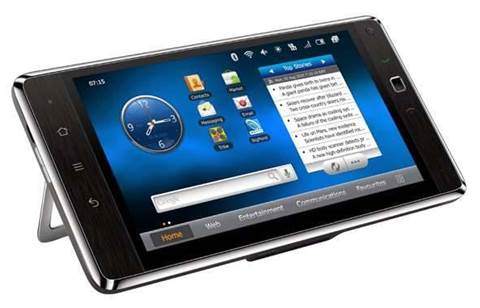 The T-Touch Tab was priced at $299 -- cheaper than many smartphones -- which could mean several compromises that might have tech enthusiasts thinking twice.

The T-Touch Tab also raised several other questions about the emerging crop of new tablet devices.

What is the ideal screen size? At 7 inches, the T-Touch Tab was one of several tablets smaller than an iPad.

And is it useful to be able to make phone calls and texts from your tablet? Like the Dell Streak, Telstra's device came with a data and voice/text allowance, though Telstra has not yet said whether this would involve a dock/speakerphone arrangement.

The T-Touch Tab weighed 500 grams, making it larger and more than twice as heavy as the Dell Streak, though a touch lighter than the iPad, which weighed 730 grams for the WiFi and 3G model.

It used a 768MHz Qualcomm Snapdragon processor and a resistive rather than capacitive touchscreen. It ran Android 2.1 rather than 2.2, and was not yet capable of playing Flash videos from web sites.

Pricing was another major consideration. Telstra launched the T-Touch Tab for $299 with 3GB of data and $10 of talk/texts. After the first 30 days, however, it would cost $40 a month for 1GB of pre-paid data.

By comparison, Optus pre-paid starter packs for the iPad cost $30 for 3GB, with recharges costing $20 for 2GB.