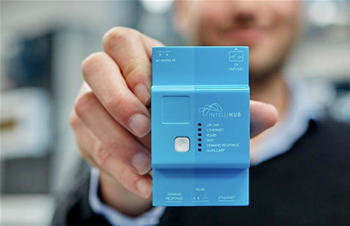 Telstra has signed a $100 million deal to provide connectivity for Intellihub’s smart meters that will add 4.1 million SIMs to Telstra’s IoT network.

However, the SIM deal covers connectivity for meters operating across the nearly 40 energy retailers that Intellihub supplies smart meters and metering services to.

Smart metering is increasingly important as rooftop solar, batteries, and EVs (both charging and acting as batteries) continue to proliferate in Australian households.

What’s happening “behind the meter” increasingly needs to be measured and managed, putting a premium on smart meter deployment.

For example, customers selling their rooftop output back to the grid want to do so when the price is high.

He told iTnews the Telstra deal has been in the pipeline for 12 to 18 months, and was triggered by the significant expansion of smart meter rollouts in that time.

The SIMs will be hardwired into Intellihub’s Intelli-M smart meters and Intelli-ConX communications bridges at the point of manufacture.

Telstra executive for industry, internet of things and unified communications Mark Chapman said the prospect of revenue from more than 4 million new SIMs on its network was only one attraction in the deal.

Telstra has made a serious corporate commitment to carbon neutrality, he said, and more intelligent energy consumption is an important part of that.

To launch into the energy retail market, Telstra Energy has secured licenses across the New Energy Market states - NSW, South-East Queensland, Victoria, South Australia, as well as the ACT.

The meters have to be “in a two-way dialogue with aggregate consumption coming from the grid, so that individual consumption is matched to the aggregate supply and demand”, Chapman said.

“Peak solar is early to mid afternoon, and peak air conditioning is evening, when everyone gets home from work. If you can pre-cool the house by a couple of hours … you can take a heap of impact off the grid in the early evening," Chapman said.

Management of the smart meters will come from Cisco’s IoT Control Center (formerly Cisco Jasper), to help Intellihub and its customers manage demand and respond to variable feed-in tariffs.

When it announced its energy market intentions at last November’s investor day, Telstra Energy’s Ben Burge pointed out the difference between energy and Telstra’s carrier market.

Energy is, he said, “a massive market, in which we have zero market share, and a tremendous overlap with our existing relationships”.

There are 500,000 smart meters currently connected to Telstra’s network.