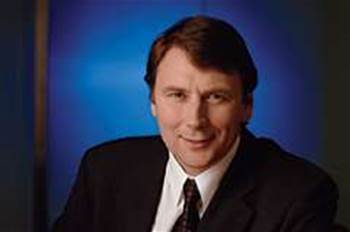 Telstra has extended an olive branch to the federal government by appointing group managing director of enterprise and government David Thodey as its CEO.

Thodey beat off a host of internal candidates, including CFO John Stanhope, to the position, which Sol Trujillo announced he would vacate at the end of June.

The appointment has been welcomed by Communications Minister Stephen Conroy.

"The Government looks forward to a positive and constructive relationship with Telstra and I look forward to working closely with David in the months ahead," Conroy said.

At the same time, it was announced that Donald McGauchie has resigned both as Chairman and from his position on the Telstra board.

Catherine Livingstone, a Telstra board member since 2000, will replace McGauchie as chairman "effective immediately".

Senator Conroy wished both Trujillo and McGauchie well in their future endeavours, saying they should be congratulated on their achievements and for "leading Telstra through a difficult time".

"Donald has a deep understanding of Telstra's importance to Australians, particularly those in regional and rural areas," Livingstone said.

"[He] led the board through the transition of Telstra to a fully-privatised company. At the same time, the company was undertaking an extraordinarily complex transformation across the company's operations. Donald's was an extremely difficult job, handled with great care and professionalism."

Telstra's new chief, David Thodey, has been a senior executive at Telstra for eight years.

He joined Telstra from IBM where he was CEO of IBM's Australian and New Zealand operations.

In a brief statement, Thodey said Telstra's continuing success is contingent on completing the transformation project.

"Completing the transformation will enable us to deliver a superior customer experience and the financial outcomes that our shareholders expect," Thodey said.

A spokesperson for Telstra's largest shareholder, the Future Fund, said the shareholder "looks forward to engaging with the new chair and board."

David Murray, chairman of the board of guardians of the Future Fund was one of the most vocal opponents of McGauchie's strategy.

In other Telstra board news, CFO John Stanhope has been appointed as an executive director of the board.

It was also announced that Peter Willcox had tendered his resignation to the board due to his concern that the James Hardie judgment may cause embarrassment to the company.

Willcox is a former director of Hardie. He has also previously stepped down as chairman of the CSIRO.

However, the board said it has asked him to remain as a director until the AGM in November.