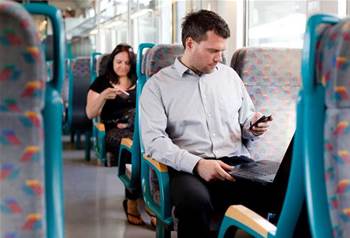 Inner city travellers to finally get coverage in tunnels, stations.

Telstra, Optus and Vodafone have agreed to build out their mobile networks on Melbourne’s City Loop rail line after being labelled “greedy" by Victorian Premier Dennis Napthine, who refused to include inner city services in a $40 million plan to roll out free wi-fi on V/Line train services.

The state government today announced the country’s three biggest telcos had agreed to partner with the state and the VicTrack rail body to extend mobile coverage to the inner city rail tunnels.

The network rollout will mean inner city travellers will be able to use voice and data services in the Flagstaff, Melbourne Central and Parliament underground stations and the connecting tunnels.

The Victorian government in April announced it would allocate $40 million from its May budget to improve phone and internet coverage for regional V/Line commuters.

But Napthine revealed the investment would not extend to inner city rail services, with the Premier instead calling on telcos to stump up their own cash before he would consider any partnerships for metropolitan services.

“At the moment I think they're being a bit greedy,” he said at the time.

Optus refused to detail the value of its investment into the project due to “commercial sensitivities”.

The majority of the project has been funded by VicTrack, with Optus leading the investment from the telco side. The Premier’s office has been contacted for further comment.

The project will use the base station infrastructure installed as part of the state’s $152 million Digital Train Radio System (DTRS) project to facilitate the mobile coverage.

The state added more than 70 new bases stations and towers around the network to support the DTRS, with around 100 base stations now in operation.