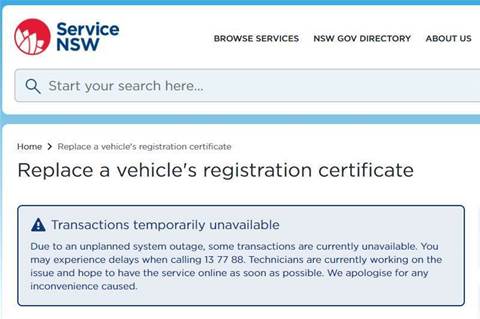 NSW citizens were blocked from making payments for things like licence renewals and car registrations for much of Wednesday due to an outage of the Service NSW payments platform.

Service NSW is the central government agency charged with the management of customer-facing government services traditionally run by individual agencies.

It operates a one-stop-shop network of online and physical service centres.

But a "technical issue" stopped citizens in the state from being able to make payments either online or over-the-counter at physical Service NSW centres from early morning to about 3pm.

The agency told customers to "delay their transactions until further notice".

"Due to an unplanned system outage, some transactions are currently unavailable," the agency advised on its website.

"Technicians are currently working on the issue and hope to have the service online as soon as possible. We apologise for any inconvenience caused."

It said it would inform users when the matter has been resolved but did not provide a time of restoration.

The agency has been contacted for detail on the fault.

Azuron does not provide support for the system. iTnews understands this function is managed by an offshore provider.

The government intends to expand the platform across whole-of-government. Roads and Maritime Services was the first agency to be cutover to the new system.

Update 2:48pm: A Service NSW spokesperson attributed the outage to a "connectivity issue".

Services have been restored but the agency is continuing to monitor the issue "closely".

"Technology is a critical part of our business and we apologise for any inconvenience to our customers," the spokesperson said.