Sydney Uni spins up 'Corona-Bot' to handle influx of queries 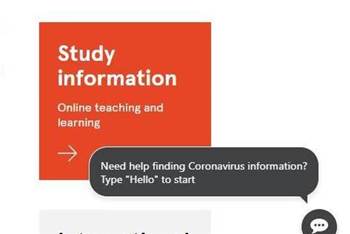 Over the course of a single week the University of Sydney has built an “AI-infused” chatbot to provide instant, up-to-date information on the university’s ongoing response to the COVID-19 pandemic.

Developed using Microsoft cognitive services, the ‘Corona-Bot’ is already handling between 200 and 400 interactions each day, with students typically asking two to three questions per session.

The response content is continuously updated to ensure the bot remains a central repository of information during the crisis - an issue iTnews discovered while putting together our own list of universities’ migration online.

Corona-Bot was initially devised as a single question/answer conversational agent able to respond to questions with a concise, up-to-date response.

However, the university is now considering how that might be further developed to enable multi-stage questions with a more natural, conversational tone.

For the university, the resulting data on what questions students are asking on a day-by-day basis is proving invaluable in informing its future responses to the evolving situation.

While students were initially asking about whether courses would be offered online, the current trend includes questions to do with exams such as what special considerations might be available for students who contract the virus and can’t submit an assessment or sit an exam on time.

“This project was a great example of the team addressing an emergent challenge quickly, with a solution that not only assists students, but also informs the University on the dynamically changing student concerns,” Steve Blunt, general manager at the university’s Automation & Innovation Hub, said.

The hub has previously used Microsoft cognitive services to deliver other chatbots, including a ‘FinBot’ for Sydney Uni’s finance department that can handle the vast number of orders, invoices and queries that nearly swamped the department.