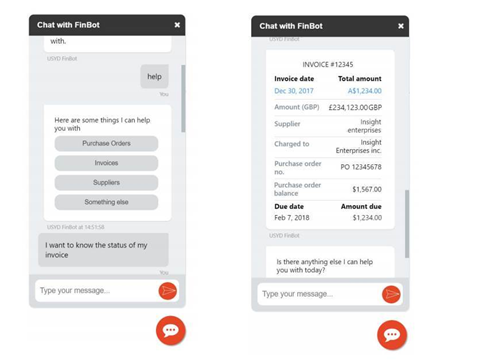 Will handle orders, invoices and queries.

The University of Sydney has deployed a conversational agent to help ease the burden of administrative tasks in its finance department.

The volume of queries to the finance team was putting enough stress on the department to hinder operational efficiency, according to a case study.

It decided to explore whether chatbots - as an initial first step into artificial intelligence - could ease some of the load on the department.

In partnership with Ignia, the university developed a proof-of-concept using Microsoft cognitive services that has resulted in the full deployment of a chatbot it has dubbed FinBot.

The conversational agent taps into the university's financial system to query data in order to communicate purchase orders, invoices, and supplier-related queries. Microsoft said special attention was paid to FinBot’s tone, personality, and user interface to ensure ease of use.

The university is now looking into how the use of chatbots in other areas could similarly reduce administrative burdens.

The tertiary education sector has been an early adopter of chatbot technology, which it has generally used for interactions with students.

Deakin University's Genie smart assistant aims to help students in all areas of their campus life, while the University of Canberra's Lucy and Bruce can assist with IT support queries.