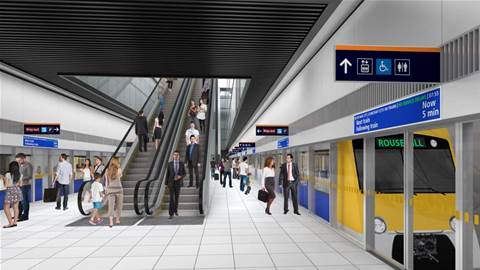 Plots app to help you find a seat on the train.

Sydney Trains chief executive Howard Collins is already thinking beyond the city’s long awaited electronic ticketing system, months before it is even finished.

At a CEDA luncheon last week, the UK-born Collins pointed to London’s Oyster as a model for the future of the NSW’s Opal card.

“The next leap in technology will be to see all of this on your bank card, internationally,” he said.

"We will see the demise of Oyster soon because everyone’s bank card - and this includes Australian travellers too - will allow them to tap on and tap off and away they go.

“I think we are going to see that on our own system."

Collins - who also worked on the Oyster rollout - acknowledged the Opal rollout hasn’t been entirely hiccup free, but said issues were no greater than he expected.

“There are always going to be some little issues and niggling things, like I experienced in 2003 when we brought the Oyster card in,” he said.

“All of this worry about journeys costing a bit more money or the system not working every now and then, it will all die down and people will take it for granted."

While the new North-West Rail Link will change the lives of state travellers with a true rapid transit model, screen doors on platforms, and automated trains, Collins admitted that by and large NSW would have to figure out how to build network capacity within the infrastructure it has now.

His team would have to “make the machine work harder and faster”, and adopting new technology is the way they plan to do it.

One new tool on the horizon is a mobile application that will tell passengers where they can find a seat on an train.

“People need to be able to get on that platform and tell with an application on their phone which carriages have seats spare, according to a red to green traffic light system," he said.

“We weigh every carriage of our trains every second they are running. We know on a Waratah train how many people are in each carriage by how much it weighs.

“That technology is coming. We are going to be smart about it and make sure it is easy for people to use."

Sydney Trains is crunching ten years’ worth of rail delays to come up with a modelling framework that will predict - nine times out of ten - how long a fault on the network will take to fix and alert passengers accordingly.

Collins also hinted at systems that will advise train travellers on car park availability at stations.

“This city needs mobility,” he said. “We have to stop the risk of this place grinding to a halt.”