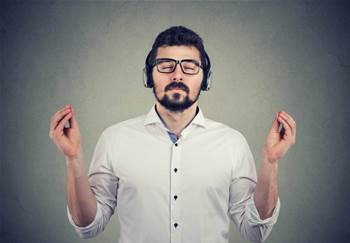 An international consortium, including three Australian universities, is exploring the quantum-equivalent of noise-cancelling headphones as a way to reduce external interference on sensitive quantum computers.

Quantum entanglement is a delicate state that requires the particles used for computing, known as qubits, to be insulated from outside vibrations, electromagnetic waves, and kept at incredibly low temperatures.

Interference not only messes with the end results, but could ruin the quantum particles altogether.

Various solutions are being explored to overcome this problem, including algorithms to adjust for inaccurate calculations and the use of photons instead of electrons as qubits because they are less prone to electromagnetic disruption.

Now a group of Australian researchers are looking at chips that have an extra quantum particle that will act like the microphone in noise-cancelling headphones - picking up sources of interference and allowing other parts of the system to generate competing signals that will cancel out the interference.

The result will hopefully be that only the signals used to encode the information on the qubit will reach the particle.

Griffith University, UNSW Sydney and the University of Technology Sydney are working together to develop separate elements of the noise-cancelling system, with support from the Department of Defence’s Next Generation Technologies fund and the US Army Research Office.

UNSW’s Andrea Morello, a professor of quantum engineering, said different atoms will be used as the ‘spectator qubit’, or microphone, and the ‘data qubit’, which will do the computing work.

“Until now we have used phosphorus as the data qubit, since it is the simplest atom to use in silicon. But our technology, based on ion implantation, allows us to choose from many other types of atoms, some of which are more sensitive to noise,” he said.

“The other atom will act like a ‘spectator in the theatre’, or like the microphone in a noise-cancelling headphone.”

The project’s overall leader, Dr Gerardo Paz-Silva from Griffith University, said the detection, analysis and cancellation of interference will need to be done almost instantaneously to be successful.

“Here at Griffith, we’ve developed protocols allowing us to characterise all of the noises that affect quantum systems,” he said.

“This needs to be done very efficiently because extracting information out of quantum systems is itself a delicate process.”

UTS will be contributing its machine learning smarts to help with that side of the project, helmed by Dr Chris Ferrie, author of Quantum Physics for Babies.

“The data-spectator qubit system is a very challenging testbed for our algorithms,” Ferrie said.

“What we will develop for this application is likely to have a broad impact even outside of quantum computing, for instance for advanced tasks in defence and data analytics,” he added.

Other institutions collaborating on the project include the US' University of California Berkeley, MIT and Dartmouth.