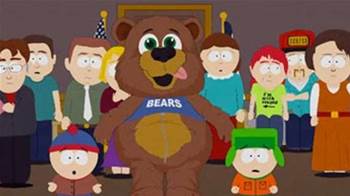 Rage over the bear suit.

A 21 year-old US man has been sentenced to 25 years imprisonment for using the internet to incite violence against the writers of the TV series South Park.

“Zachary Chesser encouraged violent jihad,” said James W. McJunkin, assistant director in charge of the FBI’s Washington Field Office, in a press statement by the US Department of Justice.

Chesser had used online forums to promote an “Open Source Jihad” in response to a South Park episode involving Muhammad dressed up in a bear suit.

He urged would-be jihadists to pay the writers of that episode “a visit”, supporting his argument with speeches by Anwar Al-Awlaki -- a US-designated terrorist who had argued for the killing those who defame Muhammad.

“Zachary Chesser will spend 25 years in prison for advocating the murder of U.S. citizens for engaging in free speech about his religion,” said U.S. Attorney Neil MacBride.

Chesser later broadened his attack to include those who opposed the censorship of the South Park episode.

In May 2010 he posted the personal contact details of people who had joined the “Everybody Draw Muhammad Day” Facebook group, stating that this was “just the place to start”.

In support of his "open source" jihad, Chesser posted the entire security screening manual used by the Transportation Security Administration to help jihadists avoid capture, and details about the construction of anti-aircraft missiles.

The FBI said it was worried about US citizens going abroad to join Somali-based terror group Al-Shabaab, also known as the Mujahideen Youth Movement.

Chesser admitted that he had twice attempted to travel to Somalia to join Al-Shabaab, once in 2009 and again in 2010 when he was stopped and admitted his intention to join the group.