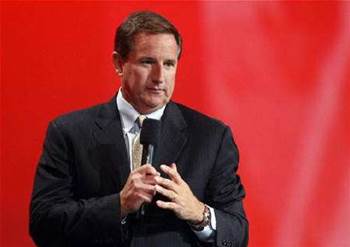 U.S. regulators are looking into the events surrounding Mark Hurd's abrupt exit as chief executive of Hewlett Packard, a source familiar with the matter said on Monday.

The SEC's probe was first reported by the Wall Street Journal, which cited anonymous sources as saying the Securities and Exchange Commission was investigating claims that Hurd shared inside information with an ex-contractor ahead of its US$13.9 billion acquisition of Electronic Data Systems in 2008.

Hurd's departure in August stunned investors and sent shares tumbling 8 percent in the first trading day after the announcement. Now an Oracle co-president, he left under a cloud of sexual harassment accusations, although the board found no evidence to back up that allegation.

HP instead accused Hurd of filing inaccurate expense reports to conceal a "close personal relationship" with a former contractor, although Hurd's representatives have disputed that.

Now, the U.S. government was also examining the claims of inaccurate expense reports filed by Hurd at HP, and looking into whether Hurd destroyed computer evidence related to his departure, the Journal reported.

HP confirmed the SEC probe but declined to comment on what the government was specifically investigating. Hurd declined comment through a spokesman.

"HP is cooperating fully with the SEC on its investigation," a spokeswoman for the technology giant said.

Jodie Fisher, the contractor at the centre of the controversy that led to Hurd's ouster on August 6, alleged in a June 24 letter that Hurd divulged details about HP's plans to acquire EDS before the deal was announced, a source said last month.

At that time, Hurd's representatives denied the allegations, which were contained in the same letter in which Fisher accused Hurd of harassment.