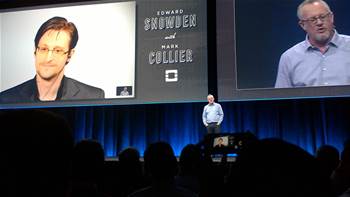 Coders and hardware makers have an “ethical” responsibility to create systems that obey users and don’t try to deceive them, according to Edward Snowden.

Appearing via video for the OpenStack Summit in Boston, Snowden pushed for the development of technology that restored – rather than eroded – what he called the protection of “human rights”.

This includes both mobile consumer devices as well as technology in data centres that underpins much of the way the world functions.

Snowden said he was concerned that fear had “become the most common political value in the world.”

“Saying ‘but terrorism’ will defang any opposition, silence any counter proposals, and this puts us in a systemically vulnerable place where the traditional systems of checks and balances upon which western civilisation has relied upon, particularly since the democratic process spread around the world, are starting to fail,” he said.

“Courts are afraid to rule in areas that are politically controversial, even though they are legally quite clear [because] judges are people too. They are vulnerable to fear in the same way everyone else is.

“This creates a world in which the weakest link in the fabric of the safeguards of our rights is increasingly becoming human.”

Snowden argued that as the “traditional mechanisms of enforcing human rights are beginning to fail, the beautiful thing is that at the same time … we’re seeing glimpses of where technology can enforce human rights in new ways beyond borders".

He believed this should take the form of “protocols and systems that invisibly surround us every day”, even if end users were unaware of the role those backend protocols played.

“[If] we create [a] safe and reliable means of protecting human rights at the protocol/ system level, where rights cannot be abrogated simply because it was convenient or simply because someone asked, we create not just a better world, we create a freer world - and it can happen on every corner of the earth as fast as we can proliferate the technology," he said.

Snowden – perhaps unsurprisingly – backed open source as the path to create change and step over weaknesses that have been allowed to take root in mostly proprietary architectures.

And he urged technologists developing systems to “think about the context and meaning” of their input into systems development.

“Fundamentally, we don’t work for governments, states or corporations: we should be working for the spirit of technology itself, moving people closer to a more empowered future,” Snowden said.

“I try to think of this in terms of values. All systems should largely be designed to obey the user and secondly they should not be designed to hide things from them or deceive the user.

“This is one of the largest problems that we have with closed source: it’s not so much that someone doesn’t want to share source code - although that matters - but in the abstract sense it’s what that means when they don’t.

“If we are going to have a computer in every home, pocket, car and place, we need to make sure that they are living by the values that protect and serve the public.”

In addition to user empowerment, Snowden also argued thought should be put into how systems can be rescued when their usage deviates from that which was originally intended.

“When you’re thinking about your ethical obligations … if [your system] creates a large-scale disruption in traditional power structures, if [it] can be used by - or amplifies the powers of - aggressive actors, whether they’re corporate, government entities or anything else, how can people be sheltered against this,” he said.

“At least enter that chain of thought and think about what you can do to protect people.”

OpenStack Foundation COO Mark Collier – who facilitated the Snowden discussion at the summit – told iTnews afterwards that it emphasised the importance of work in the OpenStack community and other open source spaces.

"It’s providing an alternative for people who agree with [Snowden] that [we need to] know what’s happening all the way down to the metal” in the compute stack, Collier said.

“A lot of the people who manage the infrastructure that powers the whole economy are our big users and they rely on OpenStack and other tools.

“For people in those shoes with that much responsibility, I think understanding vulnerabilities and security threats is a 24x7 job.”

Ry Crozier is attending OpenStack Summit in Boston as a guest of the OpenStack Foundation.